In February 2015, I published my second book and first attempt at fiction, a novel called The Ash Burner.

It tells two, related stories, that of an intense relationship between Ted and his friends Anthony and Claire, and the other of Ted's relationship with his father. In this, the novel attempts to look in two directions: towards the complex nature of family life and inheritance, but also to how that inheritance influences the formation of our own loves.

The Ash Burner was shortlisted for the 2015 QLA/Courier-Mail People's Choice Queensland Book of the Year Award. 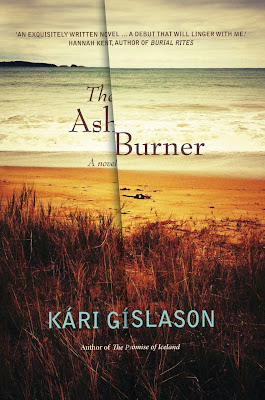 At once contemplative and precise, The Ash Burner is an exquisitely written novel that left me deeply moved by its tender exploration of beauty and grief. Kári Gíslason is a thinker’s writer: thoughtful, sentient and graceful in his questioning of the world. A debut that will linger with me.

Kári Gíslason published a memoir in 2011, The Promise of Iceland, that tells the extraordinary story of his family history. You can sense some of that material still haunting him in his debut novel, the story of a young man called Ted whose father brought him to Australia as a little boy. Ted's mother is long dead. They now live in the town of Lion Head, somewhere on the coast between Sydney and Brisbane, and while recuperating in hospital from a near-drowning, Ted meets the young couple who will become the most intimate friends of his teenage and early adult years. This is a beautifully written novel about the intensities of youth and of mourning, and the strangeness and potential tragedy of young love. Its characters are vivid, its landscapes evocative, and its narrative given shape and power by the revelation at the end.

One of the things I like most about this book is what’s left unsaid, what’s elided; or what Ted suspects he doesn’t quite understand...In a way, the voice reminds me of Sue Townsend’s Adrian Mole, though the humour is much less broad, and you could hardly call this book a comedy...Gislason’s prose is in itself a constant source of pleasure: wry, expressive and poised, and it brings the reader willingly through the frustrations of Ted’s apparently self-defeating behaviour.

Midway through the book, a character, on the eve of his departure from his hometown, insists that his best friend Ted write him letters. ‘He thought you could say a lot more that way,’ Ted tells us, ‘that email was inferior.’ This attitude runs though the entirety of The Ash Burner; though it’s set in modern Australia, its sensibilities lie much more in the past. There are no actual spirits here, but nevertheless this is a novel that’s supremely haunted.

It begins with the teenage Ted throwing himself into the ocean, with a half-sense that he’ll somehow be able to find his dead mother. He’s swept onto the rocks, badly hurt, and pulled out by his father. While recuperating in hospital, Ted meets Anthony, a boy a few years ahead of him at school, and Claire, Anthony’s girlfriend.

The increasingly intense friendship between the three of them forms the bulk of the narrative, with Ted somewhat in awe of both of them and taking part in their plans to leave the town of Lion’s Head and move to Sydney. The story spans years, and though there is a quietness and subtlety to the characters’ relationships (Ted is criticised on several occasions for being far too serious) the narrative does take some surprising turns, with one of the novel’s final revelations hitting the right balance of being both shocking and wholly believable.

In Gíslason’s first book, a memoir The Promise of Iceland, he showed that he was a nuanced writer, and here, with The Ash Burner, he has again shown his skill at mapping the subtle shifts in our lives. It’s a thoughtful work that should leave an impression long after it’s put down.

Gislason captures the searching awkwardness of adolescence very acutely. [Ted’s] evolving bond with his stern and reticent father is understated and far more compelling. The narrative arc that brings Ted to an understanding of his father’s silences and grief is handled with great dexterity.


The search for truth and identity are touchstones of Kári Gíslason’s writing. It can make for beautiful, and emotional, reading, as in his debut novel, The Ash Burner. This isn’t the novel to turn to on bad days in the search of a fairy tale resolution, or even clearly defined morality. Gíslason shows all of his characters as flawed and fractured by their lives, rather than creating heroes and villains. There’s a quiet beauty to the ability to see the good and the bad in each character, and it makes each more relatable.

Ted is a young man struggling to find his place in the world. Raised by his father half a world away from his birth place, and the memory of his lost mother, Ted understands his father best through the records he plays nightly.

The Ash Burner is a story about intense friendships, and the expectations that go along with sharing your world so completely; about love at its best and its worst. The constant tension between the poetic voice Gíslason favours, and the realism of the world he has created, is impressive. If you’re a fan of poetic voice, Gíslason certainly won’t disappoint. The prose is rich and indulgent; a dessert to be savoured rather than a quick read.


Kári Gíslason won plenty of fans with his evocative memoir The Promise of Iceland and now he will win more with his debut novel.


The Ash Burner is written in beautiful prose that sings sweetly to us from each page. A coming of age story of sorts, the tale follows the intense relationship between friends Ted, Anthony and Claire, and explores the themes of loss, grief, identity and belonging. I heard Kari read an except of The Ash Burner at the book launch and I have to say that even though I had already read it, his lyrical words spoken in his mellifluous voice turned the prose I had read into real poetry.


The Ash Burner is an insightful coming-of-age novel featuring a protagonist who is infinitely appealing. It grounds itself firmly in the art world and will appeal to fans of Craig Silvey’s Jasper Jones, Emily Bitto’s The Strays and Krissy Kneen’s Steeplechase.

The book is beautifully and delicately written.


The Ash Burner is undoubtedly one of the best novels of 2015 so far.


One of the best Australian novels I've read in a long time.


Gislason’s prose is dreamy and ethereal, exploring the boundaries between reality and memory. He charts a rich internal landscape for the characters, examining the essential disconnect between one’s own inner life and the ultimately unknowable inner lives of loved ones.


[The] style is sensitive, patient, and graceful.

- Interviewed by The Wheeler Centre (Melbourne).