This blog is by writer and academic Dr Kári Gíslason, Associate Professor of Creative Writing and Literary Studies at the Queensland University of Technology, Brisbane.

My writing began in travel literature - and you'll find past travel pieces listed under Publications - but has also included memoir (my first book, The Promise of Iceland (2011) is a travel memoir about family and my birthplace Reykjavik), fiction, as well as scholarly work on medieval Scandinavian literature, creative writing pedagogy and craft, authorship theory, and reviewing.

In 2015, I published a second book, the novel The Ash Burner, and in 2016 was co-creator (with Richard Fidler) of the radio series Saga Land. Richard and I went on to publish a book together, Saga Land: The island of stories at the edge of the world (2017). My fourth book was an historical novel set in Iceland, The Sorrow Stone, published by UQP in March 2022.
I am presently working on a memoir set in Greece. 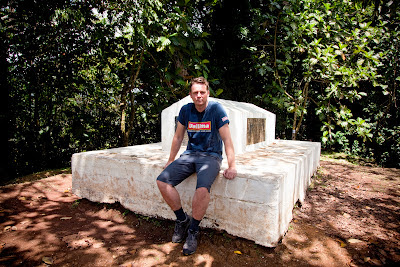 At the tomb of Robert Louis Stevenson, Samoa, Sept 2012
(Picture by Cam Cope)