As the highway slows

...Or, as the Pacific Highway slows coming into Macksville from the north. It took me a while to find the turn-off, up to the cemetery where my grandparents' ashes are interred. I took two wrong side roads, swore at myself for forgetting where the cemetery was, and then gave up and drove on to Scott's Head, where I was staying the night. When I came back the following morning I found the right road straight away. 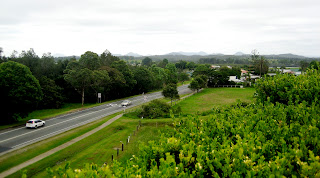 I took this picture. It is the view down to the highway, from a red brick wall that properly belongs at the side of a 1970s patio of plastic chairs and tables with vinyl covers, but which here is decorated with bunches of flowers the size of boutonnieres, the floral signatures of friends or relatives who visited recently; or, even not so recently, and whose flowers are browning at the edges. It was some two years since I'd been, and I came empty handed. Instead of placing flowers I passed a kiss from my hand to the plaques of Mildred and Harold Diggons, who for a few years lived with their two girls on the banks of the Nambucca River, on the opposite side from the Star Hotel, the cinema, and the milk bar. In those days, the highway ran in front of their house. 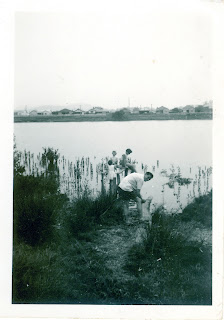 The new highway slows to 90 and then 70 and then 50, I think -- that's where you join the path of the old one as you cross the river on a narrow steel bridge built 80 years ago, during the heyday of those beautiful, industrial constructions -- just a year before the Sydney Harbour Bridge was completed. Today the bridge is actually too narrow to handle the vast numbers of trucks that pass down the highway to Sydney; in the year of its opening, only an average of 214 vehicles crossed each day.

I would say as many cars slow to cross it in the fifteen minutes that I spend with my grandparents, and that I spend once again thinking about that combination of a restless man and a hardheaded woman who didn't get on particularly well, but who perhaps got along least badly here. I am sort of writing about them in my second book, a book that will probably take me back to Yorkshire next year, where my maternal grandmother Mildred was born and raised -- she was a Doncaster girl.

For now I must say I like this moment, when I stand with them and alongside a fictional world that is both theirs and mine together, and that I have come here to help fill out with a better sense of this place, their resting place and the starting point of my book. We watch the highway as it slows and crosses the river. 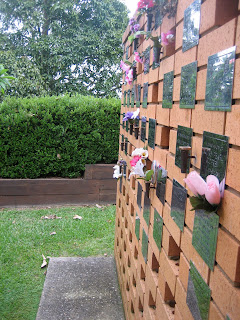 (Part of an earlier visit to the area, when my grandparents' ashes were interred, is described here.)