Sometimes you need to draw or take photographs before you see a building or landscape properly. Here are some of my sketches, all but one of them from trips to Iceland. 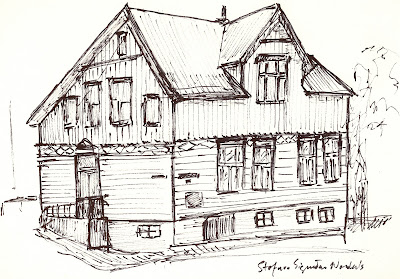 Stofnun Sigurdar Nordals (The Sigurdur Nordal Institute) in an old part of Reykjavík. This house, like many in the style, was imported from Norway during the nineteenth century. I lived and worked here on and off for six months in 2001. 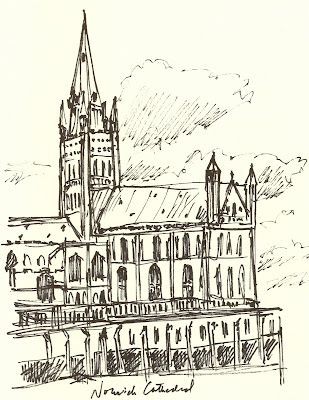 Norwich Cathedral in East Anglia. In 1999, I visited it with some close friends, Shane and Fiona - Shane was doing his PhD in England. Their apartment was just down the road from the Cathedral, which is surrounded by cricket pitches and parks. 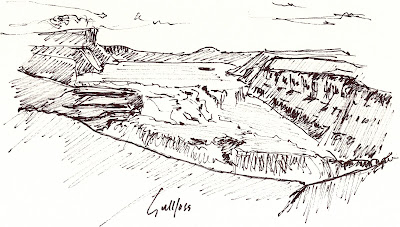 Gullfoss in the south-west highlands, a waterfall that is a bit of survivor - proposed developments that would have ruined the area were in part blocked by a local woman, Sigrídur, a statute of whom now stands near the falls. 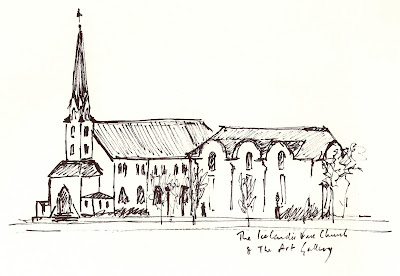 Fríkirkja - the Icelandic Free Church - near the downtown pond. The vast majority of Icelanders are members of the State Lutheran church, but the small Free Church is perhaps the most beautiful church building in Iceland. It's tucked in next to the Art Gallery.

Here, what I suspect was the last small fishing boat to be tied up at along Aegisída, a long, thin park that runs the southern shore of Reykjavík. A left-over from the days when Reykjavík still had small, independent fishermen, the boat reminds me of an old fisherman in Laxness' The Fish Can Sing who, despite the change in Icelandic society, refuses to raise his prices to make a profit from his life. Almannagjá in Thingvellir, the site of Iceland's old Assembly, established in 930. The ring road used to travel down it, but now, of course, it's mainly bus loads of tourists and the odd returning Icelander.

(More drawings of Iceland can be found here and here.)