Firstly, my apologies to Evelyn Waugh for the malappropriation of one his titles, in fact the title of one of my favourite books. But I can claim at least one thing in common with Charles Ryder: we are both of us thirty-nine; although I don't think I have begun to feel old, or not in quite the way Charles is feeling old. He has fallen out of love with the army, what he calls his 'last love,' and at the same moment finds himself in the setting of his first. The frame is a very effective way of structuring nostalgia, because I suppose that's how nostalgia works -- we place earlier feelings in the context of a present loss.

That is also the emotional setting of a book I'm working on, and so when I visited Scott's Head for the first time last week it was with the hope of picturing it revisited. What would my main character -- his name is Ted -- have noticed about a place that he knew intimately from his childhood, that he had revisited often, but that on this occasion he revisits after the death of his father? The technical question, I suppose, is: how does this character's point of view affect his perception of the book's setting? For what is the point of framing a narrative if the frame doesn't enclose the sentiment in the same way that it frames the setting and the action? 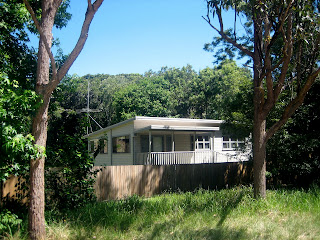 This is the house that I found for Ted. It's on a very large block on the highly desirable Banksia Avenue, and is indeed for sale at the moment; but out of real estate mode I would add that I couldn't believe my luck when I found in the real world a house ideally situated for the fictional one I had already begun to construct. The picture is taken from a narrow, white road that you might expect to find in a French village; on the other side is the dune and the tracks through the shrubs and trees to the beach. I can see Ted scrambling over them for swims in the afternoon. 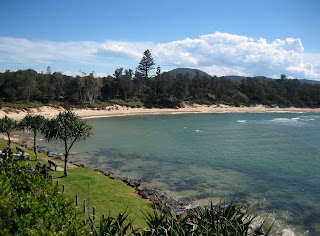 Here Main or Forster Beach. Banksia Avenue is located on the other side of the wooded dune, around the far right of this picture. This is the Brideshead of my novel, the revisited landscape, where Ted used to swim as a boy. It's such a beautiful stretch, a mini-Laguna Bay without the cafes or showiness (not that I mind cafes and showiness all that much), and you can follow it all the way to the estuary at Nambucca Heads. I went for a swim -- there were at most half a dozen others in the water, and this on a Sunday afternoon -- and then I ran some of the way to Nambucca. 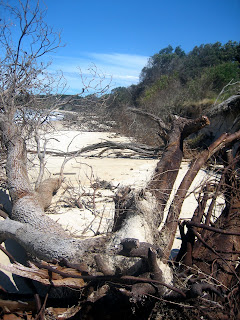 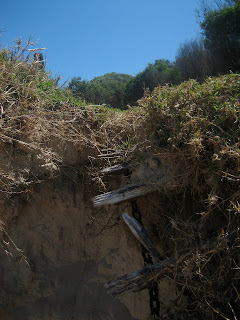 All along the beach were the signs of big tides and surf, with many trees collapsed down onto the wet sand. I read somewhere that a lot of damage was done in July just gone. In more than one spot, fences and foot planks have been turned into malicious looking ladders of rusted metal and cracked timber. 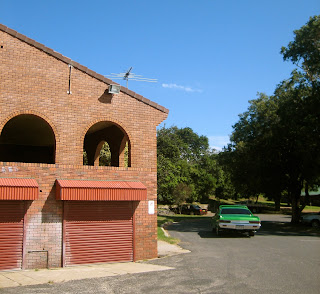 A research project in a photograph. The surf club at Scott's Head seems to me an improbable structure, something I would expect to see in a Greek-dominated street in West End. I walked around it, and had thought it completely shut, but that evening I heard at the fish n' chip shop that it still opens on the weekends, but closes at three. I took this photograph in a hurry: I wanted to catch the moment the green car passes the club house -- both survivors of a very different Australia, of big cars and red-brick buildings, that holds on in places like Scott's Head.
And below the view through wooden steps that lead upstairs to what I expect is the club bar. I think it's a view of the beach you might carry with you from childhood. 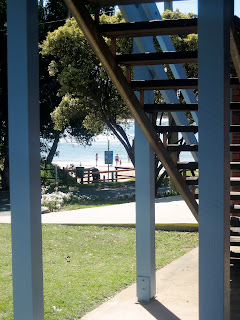 I suppose all novels are about point of view: the form, after all, is powerful because it gives us a way of relating individual perception and time. What I wanted to do in Scott's Head was understand a character's perception in terms of how I imagined his childhood might have been. I left aware that wanting to meet your own characters in this way is very odd, and that narrative is quite possibly a form of madness. But now at least I can revisit Scott's Head, and come a step closer to how that might have felt for someone else. 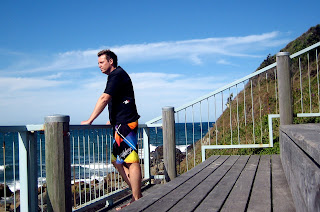