Pictures that ask the right questions

Last week, I published this short piece in the Queensland Writer's Centre magazine, WQ, about photographs and memoir. 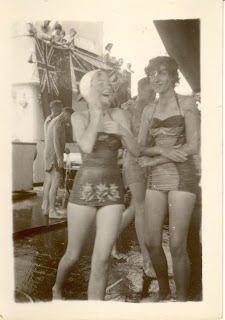 I expect many people begin the writing of a memoir by looking through old photos. Pictures, after all, belong in the past, and they hold out the promise of delivering it to us again: everyone is younger, surrounded by yesterday’s world, a moment fixed in time. Even the size of the photo paper and printing tone belong back there, in a printer’s shop that doesn’t exist anymore. And yet, for the purpose of writing a memoir, the most useful pictures also reach beyond the past, and beyond their initial role in verifying your memories, or filling out the details. That is, they are more than an account. Such pictures seem to be asking questions about what happened next, in the moments and years after they were taken.

This is a photograph of my mother Susan, taken in 1956 when she was fifteen. She’s standing on the right, with her arms crossed. It looks like she’s watching something that’s happening out of frame, and her friend is also distracted. She’s heading over to talk to someone, an off-screen presence that you imagine laughing along with the girls.

I’ve always loved the picture, even before I wanted to write about it, or the events around it. I’m drawn to the distracted happiness in it, but also the slightly melancholy sense that, whatever’s going on, seems to be coming to end – the party’s breaking up, and the girls are heading back to their own groups.

I began to learn more about the photo when I started writing a family memoir, and asked Mum to tell me what was happening in it. It turned out that it records a moment, sixty years ago, when she and her family crossed the equator on a passenger ship. What we’re seeing is the final moments of a ‘line crossing ceremony’, or a party held to celebrate the fact that their ship was now in the southern hemisphere. You can’t see him, but apparently a figure dressed as Neptune is hosing them all down.

Mum said the family was travelling from England to Australia, but also this: the photo was taken during the third time she crossed the equator. For, the family had in fact made an earlier migration, one that had largely failed and seen them return to England. Now, a year on, they were trying it all over again – having another go at living on the other side of the world.

Line crossing ceremony. To me, the phrase, like the picture, belongs to a different era altogether, when travel was much slower, slow enough for that extraordinary line crossing to be given its proper ceremony. As it should be, really. The whole ship could take part, get a soaking from Neptune. But perhaps the most powerful ceremonies were internal and familial. Or, at least, that’s how I began to think about the picture now, when I talked about it with Mum.

What, I wondered, was my mother feeling in that moment? What lay behind that distracted, giddy expression that she wore in the photo? Just fun, or something more at the heart of her character, and her openness to change and adventure? Whatever it was, I had the suspicion that she’d been chasing it ever since. That she kept looking for it in her adult life, during the years of travelling that followed and eventually took her back to England, and then Iceland, and then to Australia again.

I wondered whether there was something present in that line crossing ceremony that I might find in other photos, and in other crossings that she’d made and even photographed, eventually also with me.

One photo. The family memoir that I ended up writing, The Promise of Iceland, was full of such questions, really – much more so than answers. Often they were prompted by pictures that seemed less like portraits of the past than enigmas and riddles. But then memoirs, too, are often structured around questions and reflections rather than answers. Like pictures, the most valuable ones not necessarily those that offer up the past, but rather the ones that help us ask the questions we need to ask.