Mount Kilimanjaro is 5,895 metres tall, so the peak falls into the “extreme” altitude category, but especially for those who live at sea level, the effects of altitude can manifest themselves as low as 1,500 metres. As altitude increases, while the percentage of oxygen in the air remains the same, the reduced air pressure means the number of gas molecules is lower. Therefore the amount of oxygen available to be breathed into the lungs is also less. Most people can adapt to altitudes up to 5,500 metres, but above 5,500 metres few people can adjust anymore. Acclimatisation is a way of maximising the body’s ability to cope with the decreasing air pressure.

For this reason, we had chosen to summit via the Lemosho route. Normally a seven-day hike, we added an extra day to enhance our acclimatisation. The Lemosho route starts at the Londorossi Gate; at 2,250 metres, it is higher than Australia’s highest peak. Apart from being the longest route on the mountain, it offers other advantages including walking through a series of valleys resulting in frequent altitude gains and losses (important for acclimatisation) and also affording a great experience of Kili’s distinct vegetation regions.

Our hike had started 2,500 metres lower, six days, and 40 kilometres ago and now, as day seven began, we prepared to start the midnight ascent.

By three hours in Paul was suffering badly with altitude. Unable to focus on his breathing he was constantly dizzy. Heinrich was also suffering, vomiting and unsteady on his feet. In the meantime I was contending with my own demons.

As the pre-dawn hours approached the group split in two, with Rajab (the chief guide), Matthew (an assistant guide), Heinrich, Paul and I bringing up the rear. Paul and Heinrich were suffering physically, but for me the battle to stay awake was having a different effect as I had started to fall asleep on my feet. By 5.30am the situation was desperate, but perched on the side of the mountain watching the sunrise over Mawenzi, miraculously seemed to invigorate us all.

But Stella Point, only a few hundred metres above us, still seemed almost unattainable. We had left the rocky path up the side of the mountain. For the past few hundred metres we had been walking 20 paces and then stopping to bring our breathing under control.

Now we were on the infamous steep scree slopes. Our pace changed down again. Every step was a kick into the side of the mountain to try to gain some purchase on the scree and not waste a single inch of uphill effort. We developed a rhythm of step, breath, breath, step, breath, breath and it was this pace that finally saw us mount the relatively flat path at Stella.

Our hiking companions greeted us with cheers, applause, sobs and hugs. Now there remained a mere one and a half kilometre walk with a 200 metre climb. When compared to the previous three and a half kilometres, the path to Uhuru sounded innocuous and beckoned us to the summit. But the final stretch was monotonous, and in the dense cloud that enveloped us, it was a frustrating struggle. Finally, in desperation, I exclaimed, “For Christ’s sake, where is this bloody sign?”, and with that the clouds parted just enough for us to glimpse Africa’s highest point. We caught our breath and lunged into each other’s arms. 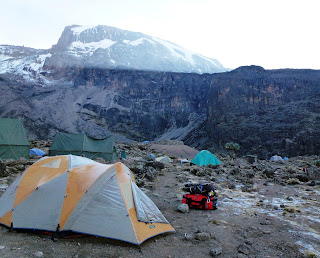 Jan Burnett is studying a Graduate Certificate in Creative Writing at QUT.