Hippos in the Morning: Postscript Zambia

I flew from Ndola in the Copperbelt to Livingstone, and to what suddenly seemed the extraordinary comfort of a tourist area: the town is a short cab ride from Victoria Falls, and the wider region has become one of those places where the first thing you do is choose items off brochures listing complex ways of encountering water and near-death: white water rafting, bungy jumping, helicopter sight seeing, drinking cruises, even wading, although not swimming. 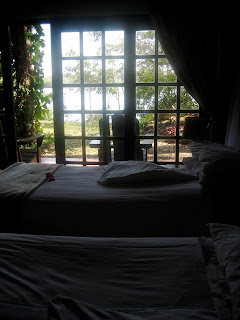 I had a small chalet room on the banks of the Zambezi river, and so I opted for watching. The river passes at an unnoticeable pace, but you know that a little further down it becomes one of the largest waterfalls in the world. This gives its slowness a deliberate, stately quality: it's just waiting for the right moment. My room's extravagant mosquito net worked, so in the mornings I lay in bed with the doors wide open listening to vervet monkeys playing and the hippos barking on the Zimbabwean side. The light was thin and crisp on the edges of the tress and jetties.

One morning, I asked reception if I was really hearing hippos in the mornings. 'Which room?' she asked blithely, and then: 'We'll send someone around.' It was as though I'd told her there weren't any towels.

'No, I mean across the other side,' I replied. 'There isn't a hippo in my room.'

The view of the river at breakfast was tranquil in a rather Australian way: already you knew that it was going to get really hot, and that the glassy surface of the river wasn't an invitation to jump in. I sat looking at it while around me a time-lapse photography of other guests came and went with plates of eggs and bacon and more or less inedible sausages: small, beefy things that tasted of old brown pudding.

I was slower to finish my coffee and also one of the few who didn't have a safari suit and a full schedule of unnatural activities involving great danger. Naturally, I felt the difference acutely, but I had also noticed that 'safari suit' was quite an expensive item on the laundry list. 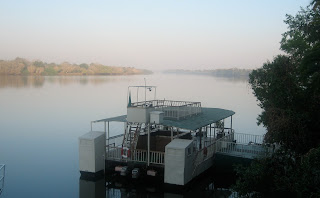 In any case, I had booked this time on the Zambezi with a view to writing about Ndola. That now struck me as more or less impossible - it was too pretty to write - so I stared at the river some more and around mid-morning booked a day trip. I was going on safari!

My companions to Chobe National Park, Botswana were a Russian Mr Bean with an enormous camera and three Texans, who I think were called Bubba, John, and Lou. Mr Bean could only communicate through his camera, but to my bemusement the Texans exchanged very technical information about the animals we encountered that day - antelopes, hogs, elephants, lechwe, elephants and giraffes, hippos, crocodiles, elephants (there really were a great many elephants), etc - and then a volley of rather low grade exclamations each repeated five or six times. For example, one would exclaim that the Boss on a wilder-beast was huge, and then another would say, 'Oh yeah, that's a big one alright,' and then Lou would say, 'Oh boy, ain't he?' and then Bubba would say, 'He sure is, Mister, he's big,' and then John would add, 'That is a big one.' It was like American golf commentary gone berserk.

It went on like this all morning, so at lunch while Mr Beanovic sat quietly beside his camera I asked the Texans how they came to know so much about the animals. Were they farmers? There was some awkwardness about my question, and then finally Bubba confessed, 'We're hunters.' Today was their last day, a rest day when they watched instead of shot.

Later we got onto the topic of work. I told them I was a writer and an academic, and they took this kindly. 'What's your line?' I asked. The same awkwardness followed. 'We're in oil,' John said at last. 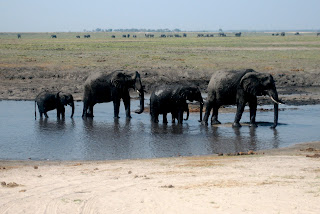 'Aren't you glad I'm not from Greenpeace!' I exclaimed.

They took my joke in their stride - it had come out involuntarily and I felt a bit rude about it - and after lunch we had a lovely afternoon watching still more hundreds of wonderful elephants grazing on one of the few areas here that remains wet in September, the driest and worst time of the year for wildlife. The Texans continued to exclaim, Mr Bean's camera nearly drove me mad, and it got so hot that the lining of my shoes began to peel off. My shoe salesperson had told me they were endorsed by Bear Grills.

I played with the lining, and then got some perspective. I was on safari in Africa, for heaven's sakes. Who cares about the lining of your shoes.

And yet I hadn't come for this safari experience: in fact, all my research goals were squarely human ones. But, actually, being surrounded by such diversity of wildlife - even in the company of those who fancied it hung in their snooker rooms - altered my perspective of the days before, in Lusaka and Ndola, where the travel had been harder. It was something to do with beauty, or the way we recognise it: as in Ndola, where I had been unexpectedly moved by the local adoption of Hammarskjöld, I felt again like I was encountering a kind of beauty that was at once new to me and radically free of me. I wondered whether there was, after all, such a thing as objective beauty?

At six, I said goodbye to Sergei and my Texan companions, and got back to the chalet thirsty and over-hot. I had allowed myself two bottles of Mosi beer a night, with the idea that modest drinking would sponsor better writing. But that night I ordered a third and began to write more fluently about the days that had passed in the Copperbelt, where it was drier and less comfortable and where there were no hippos in the morning or safari suits, but where I had encountered something of great beauty as well. 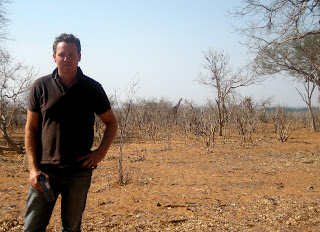