On my last day in Chiang Mai, my mother calls to say that my grandma—the one with a lump of cancer in her breast—has passed away. Except she doesn’t use the euphemism, which is strange since my mother is Catholic. (When I was a girl, the boy next door had a heart attack in the park and my mother, when quizzed on his where abouts by the paramedics, said he had gone to be with God. Later she told my father he had ‘graduated’. ‘From where?’ my father asked).

The station itself is close to the ground. A single track, buried under tuffs of grass and tatty flowers, runs parallel to the platform. Tucked to the side, between the bonsais, is a block of toilets and a shop that serves rice and fish balls. The King, who rode the rails as a boy, is raised on a flag pole; his cheeks just as pink, his sword still drawn for dragons. In the garden below, someone has made an offering: a bowl of baby mandarins and some turtle shells flipped and filled with oil. In the distance, the sun has fallen behind the mountains and the sky is the colour of grape juice.

As she moves the phone from her mouth, I can see her standing in the kitchen. She has her back against the fridge; one hand on the flat of her chest and some fruit magnets in her hair. On the stove, there is a pot with eggs inside. The water is boiling over.

‘Kate,’ she says, finally, as if she is naming me again.

But this time, she has changed the weight of the word.

One by one, she takes back the letters; sending out a notice for my name, recalling the first thing she gave me. She stresses the syllables and knots the lines and twists the new sounds around her tongue.

I undo my backpack, which is also heavy, and rest it on the steady ground. It looks lighter there. As my mother sends questions over the sea, an announcement comes over the speaker. I recognise some words I have learnt of the language: sa-bai-dee, cop-koon-ka. When the words fall away, the woman in the window stands and spits her gum. From somewhere above, she pulls down a door, then pops up a sign behind the glass. The sign is printed in strange symbols I have never seen before; crop circles, forks.

‘She left you her hats,’ my mother says. ‘And an envelope. I haven’t opened it.’

‘Coins,’ she says. ‘He has made little piles all over the floor. He won’t stop counting them.’

On Lotto days, she always played the same numbers.

‘These are lonely numbers,’ she would say, crossing the boxes. ‘That’s why they’re lucky.’

She nearly won once.

St Catherine’s is the Church where my grandparents were married; her in a dress more yellow than white, him in a suit too big. In the year that followed, they built a house and bought a car and planted a mango tree. My grandma heard a beat in her belly and my grandfather, who was a bad listener, went to war. She kept his ashes in a vase.

‘I’ll be in Bangkok tomorrow. There’s a midnight flight.’

My mother is quiet.

I hold the line.

While I wait, a man with no shoes crosses the track. He is carrying an open suitcase. Inside, there are gold chains in velvet pouches. In another compartment, there are packs of cards, and leather watches, and boxes of Viagra. In the centre of the case, there is a lighter with a naked woman on the front. Her thighs, white and plump, are curved against the stars and stripes of an American flag.

‘Special price,’ the man says, holding up some pearls.

I shake my head.

He swaps the necklace for the lighter.

‘For your father,’ he says.

I smile and turn away. The man stays. Every now and then, he flicks his lighter and says, ‘I’ll give you my banana.’

I press the phone closer, listening for my mother. There is a tap running in the background. Eventually, there is a clicking sound followed by muffled conversation, and then my father is on the line.

‘Don’t change your ticket,’ he says.

My father, unsure what to say, doesn’t say anything at all, so I add, ‘There is a man here trying to sell me his banana.’

He is the still the same.

‘I’m worried about your mother,’ he says, lowering his voice. ‘She’s talking about the ducks again.’

When my mother is unwell, she undertakes obscure tasks, usually around the house. She vacuums the pot plants, and dresses the furniture, and lets the fish swim in the bathtub. She unplugs the telephone, and colours the tablecloth, and chops up bits of bread. She bags the crusts, ties them off, and packs them in the freezer. ‘We need to get some ducks,’ she says. ‘Ducks love bread.’

My father makes a clicking sound, like he is annoyed by the question.

‘Well, the nurse was there,’ he says. ‘You know, the one with the funny nose. But all the roads were blocked because of the floods. The hospital was closed for a week.’

There is a pause.

I close my eyes and imagine my grandmother, flat on her back, waiting for her children to come to her. The cricket plays on a tiny screen above her bed. The sound is off. Her cross-word is half finished.

‘What’s another word for consolation?’ I asked her once.

‘She waited as long as she could,’ my father says. ‘You know your grandmother.’

‘Did she say anything?’

‘Yes. She asked for a radio. She said, ‘I would like something to listen to, if it’s not too much trouble.’

That was the last thing she said.

Through a break in the buses, I can see the rice fields on the horizon. They have been flattened and flooded for harvest. Near the sludge, in a square of patted grass, there is a father and son. The man uses a buffalo to plough the soil. The boy follows behind. Sometimes they stop to rest. When the rain falls and the weeds have sprouted, they will plant the grains by hand.

‘I need to write the eulogy,’ my father says now.

I understand what he means.

‘Okay,’ my father says, then he hangs up.

As the train returns from wherever it disappeared to, I notice it has changed: it is stained on the side and one of the doors is missing. Some of the ropes that connect the carriages have started to fray at the ends. A chubby woman, already on board, squeezes out the window. She has a baby in one arm and a pineapple in the other. She nurses both to her breasts.

As I near the platform, a man in a conductor’s hat, asks to see my ticket.

When he nods permission, I lift my bag onto the train and take a seat by the window. From there, I see the man step back to the empty station. He raises a whistle to his mouth and blows three times.

I take off my shoes, one at a time, and slide them under my seat.

The woman with the pineapple has fallen asleep.

A little while later, we are gone. 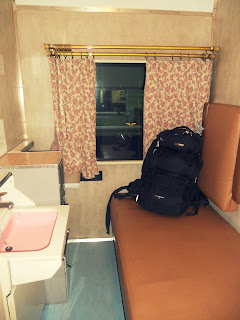