Letter from Togo, by Jen Anderson

Tracey, a fellow nurse and lovely new friend, and I leave the ship and walk in the early morning heat to the intersection outside the port gates of Lomé to wait for a Togolese co-worker Johnathon, and his friend, a taxi-driver Komla, to see some amazing waterfalls a few hours drive north of the city. Being white, we get many looks although the guards are used to the ship and its crew coming and going so they barely nod or say ‘Bonjour’. People are up and working at their stalls lining the roads, with many men wearing their pajama-looking outfits although plenty are in jeans and T-shirts. Most women wear the traditional sarong and head scarf. Johnathon finally arrives after ten minutes and we follow him to the battered but workable taxi driven by Komla and are introduced. Komla is a big barrel of a man, probably in his mid 40’s, with a ready smile. His belly extends all the way to the steering wheel and I can tell he is tall as his head almost touches the ceiling of the taxi. Komla is driving as Johnathon has no license. Both men wear T-shirts and jeans, with Komla’s shirt declaring, ‘Available for one night only.’

We drive through a chaotic roundabout along the bumpy and potholed beachfront road and I‘m already sweating buckets. The beach is at least 200 metres wide, and I see men hauling in nets filled with fish, people resting under the palm trees, roadside stalls and pipes which run sewage into the sand not the sea. We pass unfinished bridges and cramped markets where I would not want to get lost, and turn into a road toward the depths of the city. We pass dirty crumbling walls on which have been painted in large letters ‘Interdit d’uriner 500F’ – Prohibited to urinate 500 Franc fine. Everything is covered in a layer of dust or sand so it is all dry and filthy as if thirsting for some monsoonal rains to wash it clean.

We pass a lake fringed by the city and some very prominent signs about the wearing of condoms. HIV is very prevalent here and the signs are quite explicit; one showing a drawing of an erect penis wearing a banana flavoured condom, and another encouraging young people to abstain from sex. Twenty minutes later we hit the outer suburbs which means the potholed bitumen changes to potholed dirt and sand roads. After picking up supplies of bottled water we follow the border with Ghana, defined by an enormous barbed wire fence, and out into the country; I feel quite confident with Komla driving and find he has a good sense of humour as we converse in a mix of English, French and the local language, Ewe, which Johnathon translates.

Civilization becomes more sparse as we drive further and the dry red dust of the dirt gives way to farms lush with dense tropical vegetation. The unfinished concrete buildings change to mud-brick huts in sporadic villages, many with single room schools or churches. The roads out of town are mostly bitumen with occasional potholes; often single lane. Each side of the road has large monsoon drains, to catch the run-off from tropical downpours. Villages built on the dirt face the road, some with goats and lambs running freely. In one area the roads suddenly improve and proceed to lead us past what could be called a mansion in the middle of the bush with manicured gardens and a bitumen driveway – the President’s home.

As we travel north we stop at a roadside stall, and all the people crowd around the car to sell us what looks like rats, dried and spread-eagled on a stick frame and roasted over an open fire. I find out that they are actually squirrels. We constantly pass people – walking with loads balanced on their heads, riding bicycles with a live goat strapped to the back, standing by stalls filled with soccer uniforms or pots and pans, some with petrol sold in 2 litre bottles, cooking over open fires by the road – many holding up their wares as the car passes. There is a constant smell of smoke and petrol, dust and humid tropical forest.

We finally pass a street sign proclaiming we are entering Kpalimé (the K is silent), a small town and close to our destination. Once on the other side of town, we stop at a village to get directions and are told to follow bumpy bush tracks into the jungle. Tracey and I glance at each other when the track virtually disappears and becomes a boggy single lane path with extremely tall grass on either side that seems like it could hide a wildebeest or family of wild boar. Eventually the jungle clears and we see a small group of men casually standing around dressed in jeans and T shirts.

The taxi stops and we get out – mainly to stretch my cramped legs – and Komla greets them courteously. He is speaking to the chief of local royalty; one of many tribes of the area (all of Togo or Africa for that matter is made up of tribes whose lands are not delineated by European-imposed borders). This particular king, as soon as he sees that we are foreigners, decides he wants payment from us to visit the local waterfall. Komla proceeds to, courteously, lecture them on the fact that we are volunteering our time and expertise to be here to help the Togolese people and are not regular tourists. I can tell this by the tone of his voice, even though he is speaking Ewe. I can see them hesitate. Finally a decision is made and we all pile back into the taxi. Tracey and I look at each other questioningly, but trust Komla and Johnathon.

The taxi returns along the track and turns up another, this time to arrive at a dirt path fronted by a large gate. We are let through and climb the path for ten minutes before rounding the corner to a stunning scene. Multiple levels of rock break up the falling shafts of water into myriad smaller waterfalls; all landing on an enormous flat rock base surrounded by trees and ferns. It is at least 100 metres high and a hawk circles the updrafts.

We are told we can ‘swim’ here; not swim exactly but stand under the fat shower of water from the falls and get wet. Once Tracey and I help each other change, we carefully make our way to the waterfall over the slippery rocks. The guys are already there in their underwear. You can feel the spray on your skin from metres away and the sound is thunderous; you have to shout to be heard. We are helped over the last few rocks by strong hands and finally stand under the clear cooling water. The force is so heavy it takes my breath away and I can only stay ‘under’ for a few seconds. The water makes a loud cracking sound as it hits the rocks with force. We are told it is safe to drink and we gulp mouthfuls and revel in the freshness and chill after the cramped heat of the drive. 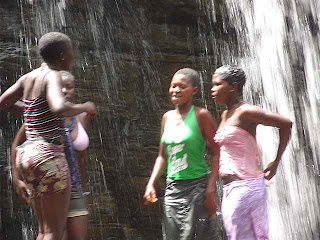 We stay for at least an hour, taking many photos with my camera. Komla acts as if he owns my camera, taking it upon himself to snap photos of us all in various poses; looking at the result and laughing uproariously, his big barrel belly jiggling and sticking out over the top of his black soaking wet underwear. Eventually Johnathon and Komla tell us it’s time to go. As we prepare to leave a group of four local teenage girls arrive. As they stand under the shower of water in their bikini tops and shorts they make up a song and dance and move their bodies with amazing rhythm and grace. I am rapt with admiration but Komla decides he wants a photo with them. I am puzzled because there is no way I can eventually get this photo to him. He stands with the girls under the raining water and puts his arms around one in particular, across her breasts, brazenly feeling her up while they pose. I take the photo but no, he wants another one. I take it then stop as it dawns on me that this is why he wanted the photo; the lecher. We wave goodbye and they shyly smile their dazzling white smiles.

We walk back down the track to find the king and his entourage have set up some little stalls to sell bananas and mangoes to the visiting tourists. Komla drinks some palm wine which he explains is made from fermented coconut palm. He holds some out for me to try. It is an opaque liquid in a half coconut shell. I take a sip and grimace. It tastes foul but it is very strong as I can feel the alcohol warming my insides as if I’d taken a large sip of brandy. Komla downs about four more before we leave, but the only change to his driving after that is that he drives faster, rarely going below 140 km/h. Despite Tracey glancing at me worriedly, she soon feels safe enough because she is asleep within minutes.

We bypass the same peaceful villages and I am feeling calm and refreshed when suddenly I see a baby goat run onto the road and into the path of our taxi. I shout out but Komla does not swerve or blink when I hear the gut-wrenching sound of bang followed by thump-thump as we run over the goat. I feel sick to my stomach and want to turn around to see if it’s alright knowing full well it is dead. But Komla doesn’t even slow down. I’m almost in tears from the shock and callousness. He turns to me as he drives, shrugs his shoulders and smiles a sort of ‘that’s life’ kind of smile.

It is almost dark by the time we return to the port gate. We exit the taxi and say goodbye to them both, thanking them for the day, although I am still somewhat stunned. Tracey and I climb the gangway of the ship and check in, and I get looks and smiles. I discover that my hair is plastered back from my head in an interesting wind-blown coiffure and my face is completely filthy with red dust except for a distinct sunglass outline. I thank Tracey for coming with me. I’m not sure I would have gone by myself so being with her I‘d felt very safe, in spite of the lecherous, possibly drunk, goat-killer. 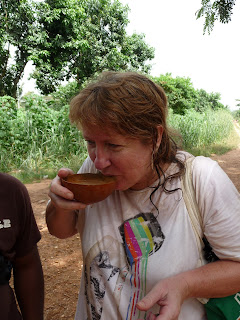 Jen Anderson is a PhD student in Creative Writing at QUT.