Letter from China, by Tim Milfull

On my third visit to Hong Kong, I realize that timing is everything when arriving in this city – land during the day, and you’ll risk haze, drizzle, or rain obscuring your view on the drive into town; land at night, and an entirely new vista emerges, with the lights on the ground threatening to outnumber the lights in the sky.
It’s a clear night when I board a bus to Ma On Shan, and as I sit with my knees drawn up towards my chin behind the seat in front of me, and holding Kiki’s hand, I look out of the window at the most wonderful landscape – something drawn from the dreams of Ridley Scott and Bladerunner laid out upon a water-bound mountainous terrain. On the horizon to the left, maybe four or five kilometers away a massive apartment complex – thirty, forty, fifty stories high, and a kilometer in length – dominates the landscape, ablaze with the lights of humanity. On the right, looming up above us are the twin pylons of the Tsing Ma Bridge, an impossibility of sequoia-thick suspension cables reaching up into the sky. This is what Hong Kong – an ancient traditional Chinese name meaning ‘land of the mist shrouded high-rise’? – seems to be all about: skyscrapers and concrete, air-conditioners and myriad lights.
In Ma On Shan, Kiki takes me to her home – one of five asterisk-shaped, multi-storied buildings – and I trundle my bulky suitcase across courtyards and playgrounds to her lobby, into an elevator, up to the 34th floor, and, as she apologises profusely for the lack of space, into the home that she and her brother and mother have lived in for more than two decades. Mabel – Kiki’s Mum – makes the same apologies, and compounds them with more for her broken English, but I’ve traveled to many countries where I haven’t spoken the language; more often than not, speaking out aloud doesn’t stack up against the strength of a gesture, or the comfort of a smile. Besides, as a Westerner in Asia– gwai lo (or ghost man) – I should be the one feeling uncomfortable, with the handicap of a single language almost ridiculous and embarrassing when those around me can speak three or four. Kiki’s brother, Birch, smiles shyly from his little room, tearing himself away from his computer for a moment to say hello. And then we feast – roast goose, shrimp, greens, Canton Chicken with Chinese mushrooms – Mabel’s specialty – beer and enough Chinese wine to lend just the slightest edge to the sunrise of the next day. 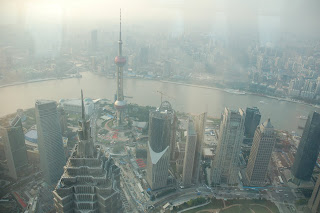 The following morning, as we make our way across the courtyards and between the high-rises, and not another gwai lo in sight, Kiki’s phone rings. She answers it, and places her other hand in mine, and we walk on towards the taxi rank. An old woman weighed down with shopping bags catches my eye and launches into a tirade, waggling her finger at me, and pointing at our hands. Kiki is oblivious, chatting away as we stroll. I smile at the old lady – it’s obvious what she is incensed about – “Nin hao ma,” I say – Hello – formal, respectful, pointless.

In the sprawling metropolis of Hong Kong where East meets West – there, it’s said, as we know it had to be – the occasional gwai lo isn’t that much of a surprise, but fifteen-hundred kilometers to the north-east, and despite a reputation as an international, cosmopolitan locale, Shanghai has some way to go before it will be ready for its International Expo in 2010, especially in terms of welcoming the millions who will come to taste the delights of other countries in its spectacular pavilions. For now, the city is a mess of construction, its riverside off-limits, the streets thronging with psychotic cyclos and scooters, the sudden, silent menace of battery-powered pedlos and bicycles, and lunatic taxi drivers and expectorating locals and ignorant out-of-towners who don’t seem to know how to walk in a straight line or at a constant pace, and unbelievably and delightfully, at one point I bellow out loud in laughter as I see a janitor pissing a long, broad arc of urine from the footpath into a garden.
On our first night, we end a long walk from Yu Garden and through the old city by strolling along the Nanjing Road boulevard, a wide mall bordered by neon and shops and huge LED screens, where hawkers peddle knock-off watches and flags to wave at the 60th Anniversary of the republic tomorrow, and traffic cops scream and sputter in fury at miscreants, and tourists gawk and chat and dawdle and stop suddenly to take photographs, and push each other into oncoming traffic, and change direction for no particular reason, and push and shove and spit and shout and laugh – I drop my normally reserved demeanor and slide down a very slippery decline towards a panic attack, before clamping down on the urge to run back to the hotel. I’ve been in crowds like this before – hundreds of thousands of people surging back and forth slowly, and usually I have the advantage of extra height to escape the crush. Here, the height isn’t the problem… I don’t know. Perhaps it’s the sensual overload. The bucolic, aquatic serenity of Zhouzhuang tomorrow promises some respite.
An hour or so into the next day, and alternately praising and cursing the intermittent air-conditioning that clears then fogs the view through our bus window, Kiki and I slip out into the streets of Zhouzhuang and see that the hordes from Nanjing Road have all had the same idea overnight. These millennia-old canals, with their gondolas and overhanging houses, and narrow, cobblestoned streets are thronging with tourists, and I’m the only gwai lo for miles around. Kiki and I fight for space as we follow our guide, who chatters amiably to his charges in Mandarin – I catch the occasional familiar word or phrase, mostly numbers, but I’m learning. And every so often, I hear a variant on a word that I’m very familiar with – lao wai. I ask Kiki about this and she smiles – people are talking about me, and lao wai is Mandarin for gwai lo. I’m onto it, and play up to their gentle phobias about Westerners, telling the locals I’m a sha lao wei – or crazy ghost man – and they smile in appreciation. In Hong Kong, the locals laugh when I use another term – ban gwai lo – claiming that I’m a clever ghost man, and tell me that chi sin gwai lo is more appropriate, for I am undeniably mad, or even pan chi sin gwai lo: fat crazy ghost man – a phrase that draws alternately amused and puzzled responses as I butcher Cantonese and Mandarin in a clumsy hybrid. 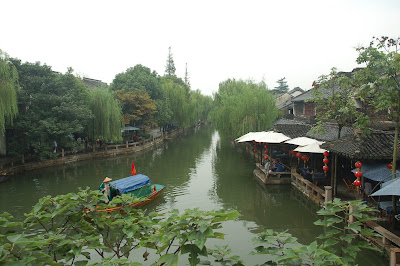 At one of those ridiculously transparent kickback tour group hijackings, Kiki and I whip through a silk factory and back to the entrance to wait for those less resistant to the wily saleswomen. An older man sidles up beside us and whispers to Kiki, who titters a delighted laugh and says that he wants to say hello to me. I turn and smile, “Ni hao ma?” – how are you? He grins happily, “Wo hen hao, xiexie.” – very well thank-you. I stutter out another fractured phrase from my limited vocabulary, “Wo shi Aodiliya-ren.” – I’m from Australia.” My new friend and his wife cackle and their eyes screw up with their smiles. “Wo shi Zhong-guo ren - Xiaanshi,” he says, and rubs his hand over my belly in appreciation, his other hand reaching up to touch my head, impressed at my height – and girth. Our respective tour buses arrive and we move off smiling and laughing and waving.
But within an hour, at another rip-off venue where inscrutable Buddhist monks tell our fortunes and encourage us to spend several hundred dollars on votive candles, we stand outside in the carpark waiting for our missing tour-guide and gossiping in three different languages with the other tourists. I tell Kiki that I see my friend from Xiaanshi a hundred metres away, and walking slowly towards us, a huge grin on his face, and camera primed in his hand. When he finally draws up beside us, I point to the camera and gesture to both of us, “Photo?” He nods. We stand and pose while Kiki sets up for the shot; Xiaanshi hugs me tight with one arm, the other resting comfortably on my belly – a crazy, fat, gwai lo Buddha. As we change cameras – I want evidence of this encounter too, he smiles again and the hand behind my back slips down onto my bum and offers a hearty squeeze.

What’s the Canto-Mandarin butchery for “sexy, fat, crazy ghost Buddha”?
The author: Tim Milfull is a PhD student in Creative Writing at QUT.