Letter from the Outer Hebrides, by Mhairead MacLeod

My family, an errant leaf from the MacLeod tree, seems to be attracted to geographical extremes. As a consequence, my childhood memories include sliding down a snowy slope on my sled in Scotland, having a pet hyena in Tanzania and swimming in the clear creeks and waterholes of far north Queensland.

But before that, in the very beginning, my world was a small village in South Uist, Outer Hebrides. I was too young to remember it, having left when I turned one. This year I finally went to those islands again – as research for my novel set in that region and also to see if I felt a connection to that cold, remote place the rest of my family talked about as if I should remember it too.

The visit began with a ferry ride across the Minch from Ullapool on the north-west of Scotland to Stornoway in the Isle of Lewis, the top of the ‘Long Island’ as the Hebrides are called by their inhabitants. Lewis is not a separate island - it’s joined to Harris in the south and together they form an elongated diamond of moor and mountain. Two of my older brothers accompanied me. I took photos of them by Ullapool harbour as the grinding Caledonian MacBrayne ferry steered to the quay. With a backdrop of drizzle, they grinned cooperatively – tanned in tropically bright clothes. Already this first-generation Diaspora looked exotic in their original country.

We lined the car up on the dock and went off to buy tickets. There were five people in front of us in the queue and they were all MacLeods. The ticket-collector rapped on the window. His name tag announced he also was a MacLeod. We followed all the MacLeods of the world into the stomach of the ferry. When we arrived in Stornoway an hour or two later, evening was setting in, but being summer, the sun was still high at 8.00 pm. I was already beginning to take for granted the picturesque town, the cobbles, the ubiquitous huge seagulls, as a local would. Outside a shop ‘MacLeod Butcher’ was stencilled in large print above a dazzlingly bad reproduction of the clan’s bright yellow, red and black tartan. A van overtook us. ‘MacLeod Removalists’ it announced, by this time, almost redundantly. We were beginning to suspect we had landed in a film set for ‘Deliverance 2’.

Lewis is a haunting place. This may have something to do with the Callanais standing stones high on its north-west side. Laid out about five thousand years ago in the shape of a cross around a circular burial chamber (although they are pre-Christian), they overlook lush fields and a glistening sea. People ascribe all sorts of spirits to them, and locals long believed they were men turned to stone. But there is something reassuringly permanent about them, no matter how many human sacrifices they may have hosted. Of course this is speculation; as with Stonehenge, no-one is sure of the reason for their existence. Further north there is an Iron Age broch at Dun Carloway. Resembling a nuclear cooling tower, it’s a fortified house of stacked stones, an early castle from the last few centuries BC, which originally stood thirteen metres high and an engineering marvel because it used no mortar. In relatively recent times, the sixteenth century, one inspired Highlander climbed its outer curved stone walls with the aid of two daggers, then smoked out the cattle raiders who were hiding within. 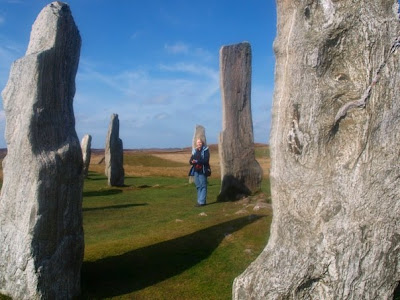 Wherever you go, you are informed by the landscape that before the power lines, tarmac roads and road signs, there were conveniences and edifices of a different sort. Prehistory is in no mood to be forgotten here. After the ancient settlers had left their standing stones and brochs, the Vikings came. They were obviously impressed with the place because they made Lewis part of the Norwegian kingdom, only ceding it back to Scotland in the thirteenth century, taking their language with them, but leaving behind their place-names, bloodlines, a horde of chessmen and a few good skeletons. The famous Lewis Chessmen, proudly displayed in the British Museum, London, were found in Uig (a Viking name) on the west coast of this island.

We travelled down to Harris and stayed in a centrally heated cottage by Loch Tarbert. This was the base from which explored the south, walking the six kilometre Coffin Road, so named because the ground is so soggy in the east of the island, the inhabitants had to walk right across to the other side to bury their dead. It is optimistically named, because there is no road at all, merely a meandering glen, a natural rift which leads to the west. It could have been the pristine air, the clear mountain burns, the soft mauve and brown colours underfoot, or simply hearing echoes of our voices answer from the mountains, but we felt exhilarated. This despite the boggy ground (I stepped into water up to my knees), which forced us to pick our way from rock to rock. The burial place is at Luskentyre and like so many beaches on the west coast, it has long white sands and an aqua-blue sea – elements usually associated with the Caribbean.

On the southern tip of Harris at the foot of bulky mountains, is Rodel, where there are only two buildings - a hotel, and beyond it a church, St Clement’s, built five hundred years ago on top of a much older one by Alisdair MacLeod. His nickname was ‘Crotach’, meaning humpback, on account of a sword wound received in a skirmish with the MacDonalds in Skye. He was his clan’s eighth chief, who returned from the Crusades regretting war and took up a life resembling that of a monk. His worn bronze effigy lies inside the church in knightly armour, blade in hand, in company with those of his descendant chiefs.

The southern part of the Hebrides trails off the northern diamond like the string of a kite. We crossed the Sound of Harris for North Uist. The ferry zig-zagged across the water to avoid hidden shoals as dangerous as invisible mountains. The ferryman (rebelliously not a MacLeod) said ‘you’ll only need a one-way ticket’. His comment made sense as soon as we glided into Berneray. No need, no desire to return. I had telephoned the day before to book a vehicle on the island. The shore was deserted except for a few cars, but no sign of Ask Car Hire . Typical island casualness, I thought. I was wrong. One of those cars was for us - its key trustingly in the ignition with a form for me to write out my address for later invoicing. This is something my mother had always told me about the Hebrideans – their scrupulous honesty and trust. I had almost not believed her.

North Uist was the main area of my research. It’s where my novel is set, during the nineteenth century when villages and communities were forcibly cleared off, en masse, and sent to Australia and Canada. Driving down past Sollas, reminders of this time lined the roads - blackhouses and cottages now just piles of rubble. Here also there had been unnecessary mass starvation among fertile green hills, in the name of industrial progress and ‘improvements’.

The road between North and South Uist is linked by a thin causeway; treacherous during storms. The day we crossed it was calm, but we were alerted by signs warning us ‘Caution. Otters crossing’. It was a smooth ride, delayed only by the occasional tractor pulling a wooden cartload of peat. In the afternoon we arrived at the end of the kite’s string – Lochboisdale, where my mother plucked her own chickens and my brothers went to school. This is the place I have seen in photos; three boys standing in front of my father in his dentist’s white coat and behind him a vast expanse of sea and sky. The buildings were still there, our old house with a new façade, the general store, the schoolhouse now middle-aged and abandoned.

A few fishermen on the jetty with familiar-looking faces stopped to stare at the visitors. They saw outsiders, fallen from the Australian sun.