Letter from Bergen, by Philip Neilsen

In 2008 I published a self-satirising poem about how I had visited the countries of three of my grandparents – , and – but had never ventured to the fourth, . The poem ends with my firm conviction that if I ever go to I will not feel the ancestral connection that I should.
Great grandfather Nilsson left
in 1874 for the windjammers and northern
. I am delaying this fourth
and final trip, the one to .
I can see the photo already: there I am,
standing by multi-coloured boats
in the rain, or on the edge of a fiord
with a beanie pulled down over my ears,
looking genetically uncomfortable,
trying to smile my way into the frame.
It was true that I had kept putting off going to . This was because I hate cold, wet weather ( is famous for having more rain than any other place in , pretty much – they have an October Rain Festival with an Umbrella and Raincoat Parade). I find even sub-tropical winters a trial. If that weren’t enough, I dislike seafood ( is famous for its fish market), and perhaps as a consequence, I don’t much like the ocean or boats. Even our warm Australian beaches hold little attraction for me. They are sterile and monotonous. Seen one beach and you’ve seen them all. I much prefer to spread my beach towel next to a creek in a clump of Casuarinas, with Eucalypt and Angophora mountains defining the distance. Here I can listen to the subtle energy of the water and admire the infinite variety of green.
But this year, after considerable persuasion from my wife (unlike me, a scarily intrepid traveller – she thrives on cold and wet, snow and sleet, and is never sea sick), I booked our KLM flight from Heathrow to . The stay would be for three nights and I figured I could just possibly survive for that long. The average temperature in in mid-summer is 11 degrees minimum and 18 degrees maximum – roughly the same as a July day. is the seventh most northerly town in the world. I bought multiple packets of black thermal underwear designed to help lost skiers survive overnight in rough snow caves, a thick snow beanie and several woolly jumpers to pile up under my wind-resistant mountain jacket. On the recommendation of Kári Gíslason, chronicler of the notable rocks of , I bought Danish rain-resistant hiking boots. I confirmed with the hotel that they had double glazing and central heating.
We landed on the afternoon of July 1. I piled most of my special clothing on and bravely lumbered out of the airport doors. I couldn’t believe it. It was 25 degrees centigrade – the perfect temperature for human happiness. The sky was a vivid and unblemished blue. As the air-conditioned taxi took us into through scene after scene of natural and architectural sublimeness, it became obvious to me that our KLM plane had in fact plummeted into the sea, I was in fact now dead, and had in fact now reached heaven. The brightly coloured wooden houses with their high-pitched tiled rooves were enchanting, the seven mountains that surrounded Bergen were exactly right (like three bear porridge – not too large and not too small), the harbour was precisely correct (not large and roiling, but both impressive in reach and still small enough to relate to), the clean cobbled streets led to one charmed corner and curiosity after another. And I couldn’t detect any seafood or representation of sea creatures at all. 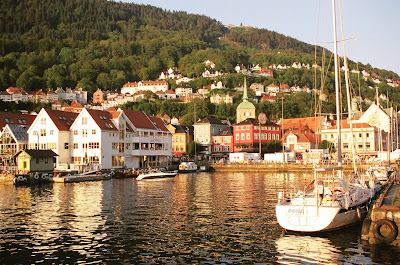 Since the sun doesn’t set in Norwegian July, we spent long days of magic walking the streets (hardly any of them polluted by tourists – most of them we had to ourselves) and racked up a record number of photographs. We could point our cameras anywhere at random and come up with a memorable rectangle – vista upon vista, or small exquisite detail - carved wooden doors on people’s houses, flowers shimmering from earthen pots, happy people everywhere. Friendliness paired with Lutheran modesty. Even the town’s token six bikies were polite. A gang of crew-cut youths practising karate moves outside Johanneskirken smiled at us and began dancing instead. We went on an invigorating fjord cruise and I got sunburned - on a fjord. But it was a friendly kind of sunburn. We spent blissful hours wandering around the two main mountains that overlook the town: Ulriken (rocky and majestic like a milder version of Scottish mountains); and Floyen (green-wooded and filled with bird song and wild flowers). I think the morning spent on Floyen was the peak travel experience of my life – trumping Mt Engelberg in , Freiburg in the Schwarzwald, Inverness in northern . gets demoted to the third rank. And that’s saying something.
The helpful students at the university explained that they had demanded recently that creative writing classes be offered – a truly enlightened youth cohort. The museums were a manageable size, with informative but not too wordy exhibits of Nordic culture and art – and completely free of the rampaging school groups that blight every other museum in the and . I suspected that the Vikings were just social networking when they travelled to and the . And on the last afternoon we wandered out of the 13th century Haakon’s Hall and heard a familiar Grieg melody coming from the nearby park. An orchestra and young solo violinist (she in bare feet) were rehearsing on the soundstage, while a handful of local people sat on velvet grass in the sunshine and listened. Those are the serendipitous moments that make travel worthwhile.
On the harbour I discovered that there was a rare species of boat I actually liked; here they sailed in a pertly white and spotless way, sporting Norwegian flags, and the person at the tiller always waved to us. All along the harbour shore, and in those spots on the Fjord where there were tiny clumps of paintbox houses (also flying Norwegian flags), people came out onto their verandas and waved. Normally I distrust flags – flags mean nationalism and parochialism and division and war. Here they just signified ‘I’m living in and I can’t believe my luck. I’m sorry you can only visit’.
It is true that I was lucky to arrive in what the locals considered almost a heatwave. And it wasn’t entirely perfect. Edvard Grieg’s statue near the town centre’s lake revealed he was a diminutive genius, and the small fish market did smell mildly of seafood – but only if you got up close. You could easily avoid the fish stalls and there, right beside them, buy enormous ice cream cones or fruit from beaming Norwegians with blue eyes like lasers.
All those four days the air was sweet. The light was bright and kind. The mountains followed me around benignly. The hill-tumbling wooden houses and green-spired churches threw their colours across the shining ripples of Vågen .
My poem had been misguided. I was in the frame. I was almost home.