Letter from the Coleridge Way, by Lesley Hawkes 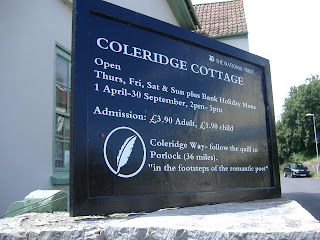 On August 2, 2008 Sue Carson and I were mid-way on our walking expedition of the new Coleridge-Way walk across the Quantock Hills situated in the beautiful Somerset region of Britain. The walk follows in the footsteps of Romantic poet and devoted walker Samuel Taylor Coleridge. It begins in Nether Stowey and ends at Porlock. We had just walked up and up the Quantock Hills. In fact we appeared to spend most of the time going up and very little going down or across the landscape. We had no guide and no specific map. We did have a compass that we learnt to use while on our travels and two printed sheets of instructions. If one sheet didn’t make sense we turned to the other sheet in the hope that it made sense and usually it did.

While we were following detailed directions telling us to zigzag north while keeping the far fence in sight we both heard strange music. It was blowing a gale and our vision was greatly diminishing (the fence was becoming further and further away) because of fog or mist or some English climate oddity but the music was becoming clearer. I, at first, thought it was the wires on the fence ringing because of the wind. Sue believed this for a second or two but questioned as to how they could have such a melody. The music enclosed us and as we zigzagged across the hills it kept encircling and rising above us. We were very perplexed because we were miles from any farmhouses or buildings. Finally, we made it across the hills and the music stopped as suddenly as it started. We decided to do what Australians do best and just pretend it didn’t happen.

A couple of days later we had travelled to the Lakes District and were visiting the Wordsworth Dove Cottage Museum at Grasmere. The Museum has headphones that allow you to listen to some of the influences on the Romantic Poets and to some of their poetry. We each put on headphones and were dumbfounded because playing through them was the exact music we had heard on our walk. “The Aeolian Harp” is a poem by Coleridge in which he explores the mystery of this instrument and writes of the unfathomable space that spreads with the music. The harp produces music when the winds blows on its musical chords and the poet is driven to respond to this natural relationship through poetic verse.. We didn’t see the harp but we certainly heard the music while walking the hills.
The author: Lesley Hawkes teaches in Literary Studies at QUT