At 1am tonight, the Queensland border will fully re-open to the other states and territories of Australia. Strict border restrictions and controls were introduced in 2020 to limit the spread of Covid. At the same time, they have reminded us of the nature of the Australian federation: the states are largely responsible for health and can limit free movement to and within their jurisdictions. As a result, during the pandemic we've seen different parts of Australia adopt their own approaches to managing the crisis, and internal borders have become almost as powerful and defining as our international one.

The desire for boundaries is ever present; it's not just a Covid thing. We see it every day in the news, in political gestures such as Brexit and in anxious deliberations about what to do about a tennis player who arrives unvaccinating, but all around us, too, at least in my suburb, where each year more and more tall, block-out fences guarding property and privacy replace the see-through and lower fencing that used to dominate in Brisbane. Boundaries limit access, and assert ownership and responsibility, and in this way they are meant to keep us safe.

This week, one of the local schools in my area has replaced the fencing on a length of ovals that everyone calls 'the flats'. Even though they belong to the school, these ovals are always being used by others, I'm sure with the school's approval, for the old fencing was only ever some steel rails that seemed designed mainly to keep cars off the grass. In some places, it had even become embedded in tree trunks and encased by branches. The new fence is similarly porous. Though it's a wooden picket fence this time, there are plenty of gate-less openings and it is only waist high, that is, easy to jump or step over. The fence will do a job in keeping cars off the grass and cricket balls from running onto the adjoining road, but the ovals remain in full view. They are open, and different kinds of safety (that come with community health and enjoyment and sharing spaces) will no doubt result.

In arts and literature, boundaries are often questioned and tested and made fun of, but of course they're just as powerful as other kinds of social and cultural borders, for they're used to define credibility and expertise and to gauge and even predict the value and quality of a work. The divides between so-called capital "L" literature and others kinds of writing, between forms, and between art and entertainment are seen as old-fashioned and unnecessarily value-laden, but they're regularly asserted nonetheless - in prize culture and 'best-of' lists and grants and the shelving and labelling at bookshops - and writers and artists who work across forms are sometimes viewed as diluting the impact of their best work. I suspect a belief in borders is behind this kind of approach, and that its valorising of singularity and isolation, and purity of form, is something that most artists and critics would find disturbing in other contexts.

This morning, in a moment of idle thought as I drove past the ovals, I wondered what would happen if the government declared that from 1am tonight there would be no more borders between art forms - film, literature, visual arts, dance, music and all the others. From 1am precisely, they would be as welcome in each other's territories as the people of Australia are now welcome to come to Queensland. If there is to be a fence between literary fiction and genre novels, henceforth it will only ever be waist high and easy to jump over, just like at the flats. 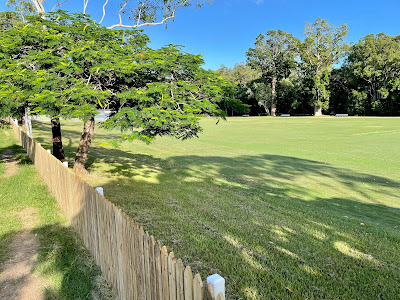