On Thursday 22 March, I had the pleasure of launching Philip Neilsen's new book of poetry, Wildlife of Berlin at Avid Reader Bookshop in Brisbane's suburb of West End.

Here's an edited version of my introduction to the book.


I have a few things I’d like to say, a short speech. But I’m not sure about its structure. Or, rather, I feel there may be some steps backwards and forwards. But perhaps that suits this book, and the ways in which it steps backwards and forwards across times, places, and images. And, in more careful ways than I’ve managed here, brings them together.

I think Philip and I first met when I was a PhD student, around fifteen years ago. I had long hair and wore check pants. I knew Philip’s name the way, as a student, you know the names of established writers: as a voice, really – a poet. Even though I was a literature student, that still seemed a distant thing, an idea as much as a person.

But the person I met was also a teacher, and I was becoming one of those. Teaching was something I understood as being more than an idea. It was about people, and the pulse of a room, pacing your thoughts, perhaps even the metre, rhythm, and the music of the spoken word. Teaching was about taking note, observing, and speaking really only if you had to. It was also about paradox and incongruence, for I saw that a good class often brought together ideas that were usually kept apart. In that way, a classroom could be a hospitable place, like a poem. 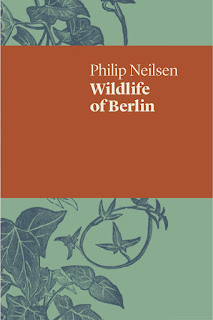 Philip’s poems, I thought, had those qualities, as well. Or so it seemed to me when I first began to read them. My early sense of Philip was shaped by having met him in his role as a teacher. An early sense, as I say, but it’s hard to shake first impressions of this kind, and over time they’ve grounded my reading of him as a person, but more especially tonight, my understanding of his poetry. Over the years, I’ve come to know Philip through a sense of how teaching connects curiosity about life to our conversations with other people, and especially our students.

That’s something of our shared past, mine and Philip's, although I’m very sorry to say that these important exchanges haven’t appeared anywhere in this collection. It’s just as well that I’m here to tell you about them. It’s not as though Philip doesn’t know the hazards of leaving people out. Towards the close of this book, we read about a review, written twenty-four years ago, a “black catty” review that hacks at another of Philip’s books. Why? The reviewer was, no doubt justifiably, upset that he had not been included in the book in question.

That person, we read, now wants to be friends with Philip on Facebook. Twenty-four years have passed, after all. If he can’t be in a book of written lines, cannot he not, now, at least be in Philip’ Facebook timeline.

For a moment, the poet allows us to feel the pressure of the many years that have passed. The enduring pressure of harsh words exchanged long ago. And the pressure of the things the poet has said and regretted. That we may have said in our lives, as well. But then, happily, we also hear the tap on the keyboard that confirms the friend request.

It’s a satirical moment in an often wry and witty book, although in this collection it’s rare in its subject matter of writers’ rivalries. Many of the poems share this Facebook-moment’s insistence on the everyday, the now, and how the now seems always to be in the business of expanding the past.

But this book places itself very happily within poetic traditions and the work of others. The first long conversations I had with Philip were about poetry, especially about W H Auden, a poet we both love, and I think Auden’s extraordinary line, “the crack in the tea-cup”, which appears in this book.

I remember we talked about other poets, too, who also show up in the collection as an ancestry shared by all readers and students but also, I think, as a hoped-for audience for the book. Whatever years have passed, twenty-four or one hundred; however mortal poets may be in reality, Elizabeth Bishop, Philip Larkin, and Judith Wright, Auden, are here and being asked to listen, if they can, because many of the poems seek out their ways of remembering and seeing.

Like those writers, Philip has produced a work that demonstrates how observation becomes part of a quiet form of instruction: sometimes directed outwards, as in a classroom, but very often internally towards the poet.

In Wildlife of Berlin, this is expressed in contradictions, in wit, self-effacement, but above all in searching and allowing it to be the goal rather than a road to a final answer. There isn’t merely an acceptance of doubt and paradox. These things are insisted upon, and chiefly by way of incongruity, the strange confluence of ideas that marks conversation.

This verse, about a failing love affair, is from “Red-capped Robin – Long Pocket, Indooroopilly”:

The last time you were an hour late.
I sat with the bird and the flotsam,
living in the moment, which smelled
of vinyl seats and soap.

In “Marienplatz – Munich”, the poet is told that “possessions, like regrets, are ridiculous”. And he sees them: “swarm like starlings, / exclamation marks without a sentence”. In another poem, we meet Lady Chatterley. Once, after she has made love to Mellors, she hears “the cold stone of blood / tut tutting at the top of the hill.”

Such observations have the effect of slowing time, what in one poem Philip also calls “time slips”; and, in another, the “urge to collect and catalogue / this pageant, to slow it down.” The poems meet this urge, and the past is given a seat and, in a sense, is confirmed as part of the class, the everyday, the present. It nestles into the everyday: the vinyl seats and soap.

Rooms still imagine themselves as thinking spaces,
classes still have epiphanies which come
and pass, well-lit, like a night train.
A tutorial becomes a bird of paradise.

A couple of days ago, I took Wildlife of Berlin to a class, and read out this verse from it.

To start this tutorial I have a question:
how many of you have had a broken heart:
the shy ventricle and pink aorta parted
and pulped like a smashed melon?

I have to say my class looked quite confused and perhaps even a little frightened. Did I really expect them to reveal their broken hearts? No, I didn’t. They laughed, relieved. And, then, that became our discussion: what we are expected to reveal, and how that becomes part of the stories we create.

Even though we no longer work together very often as teachers, this week Philip's poetry began a discussion in one of my classes. It was about observation, acuity, and, for me, it was about the way your poetry is a companion of curiosity, just as teaching can be.

Earlier, I mentioned a line by Auden, part of a verse which Philip quotes. The verse is from the poem “As I Walked Out One Evening”:

The glacier knocks in the cupboard,
The desert sighs in the bed,
And the crack in the tea-cup opens
A lane to the land of the dead.

In Philip's book, the quote is given at the beginning of a poem called “Polar Bear Noir”, which also features this line about the aurora borealis: “a lime green wave of northern lights / hugs me like a heartbeat monitor.”

These lines stay with me because their strangeness, how they are at the once reaching for the sky and for hospital equipment. And for their memory of Auden, who also walked through streets looking for the past, and distant places, in the everyday present.

But somehow these are also lines that I detect from the kinds of conversations we’ve had over the years, and that I expect Philip has had with many of the people here tonight, and of course with many of his students. Like me, I’m sure they wish the very best for this book. It is a remarkable collection: pleasurable, intelligent, and generous.

A book of poetry that welcomes the reader and converses with them. 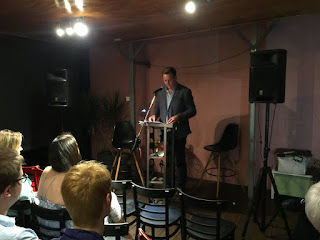