A short travel piece, 'Reading Past', about a trip to Greece that I took in my teens has appeared in the August edition of Avid Reader magazine. It's available for free online, but I don't think they'll mind if I reproduce the story here.

One of the few specific details that I remember from my gap year travels – now more than twenty years ago – is what I read. A Scottish friend and I made our way, half by thumb and half by trains and ferries, from London to Corfu. In my backpack I kept the following: an anthology of Tennyson’s poems, Karl Marx’s Das Kapital, Emily Bronte’s Wuthering Heights (of course), and Zen and the Art of Motorcycle Maintenance by Robert Pirsig.

I sometimes had to fight my friend for Wuthering Heights, which we read at the same time in early winter in northern Corfu, just when the first rains came and the black market work dried up. He more or less left me alone with Marx, didn’t interrupt my reading of Tennyson at all, and only when we’d read through all the pulp fiction left in our villa room did the Pirsig catch his eye. I think he still has my copy.

Our problem, which in a way was a good one, was that we’d become stuck. We didn’t have enough money to keep travelling, and there didn’t seem to be any way of earning more. Our solution, which I suppose in most ways was a bad one, was to read: it rained and we read. Marx was very little help.

Some days we did punctuate our routine with long walks up a winding hill road, past olive farms and goat pens and very old shepherdesses. Tennyson, I knew, had something to say about pastoral life, but not this kind. The old women moaned terribly, more I suspect from rheumatism than lovesickness.

We would make it to the hilltop village of Karousades, where late each morning we ate our only meal for the day at a place known locally as the Pirate’s Taverna. The owner was a genuine pirate, insomuch as he spent his winters making boat trips to South America. One morning he offered us positions as crew on one of these trips, on condition that we ‘get along with the other crew.’ We were a little worried about what this meant, and declined.

Instead of sailing for America, we walked back down the hill, past the old women in the shadows and their Gothic groans, and resumed our reading.

Pirsig, I discovered, had a point to make about revisiting places, and looking for the ghosts of your former self that inhabited the roads you’d once travelled. The feeling that Motorcycle Maintenance produces, and which I didn’t really understand at the time, is akin to Freud’s idea of the uncanny. That is, you experience something that is simultaneously familiar and strange: your former self as you find them in the places of your past, but also as a phantom presence that to some extent escapes definition.

I suppose, inevitably, that is the nature of all return journeys, those undertaken physically or in the remembering. With luck, we can be reasonably sure about what we were reading at the time. 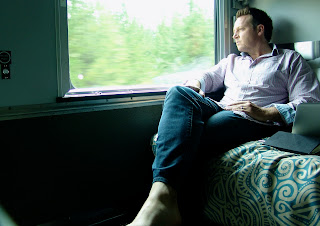