A Letter from the Tower, by Richard Carroll

We caught our first glimpse of the Tower as we drove into Allevard-les-Bains, a small town nestled in a valley at the foot of the Alps in Savoie. The Tour du Treuil is an imposing medieval structure on a knoll on the western slope of the valley, from where it presides over the surrounding countryside with an unflinching eye. Originally built in the twelfth century as a fortress from which the ruling powers could observe the traffic through the valley below, the tower has had many uses over the centuries, one of which was housing Russian refugees during the Second World War. Fortunately, Rose and I weren’t refugees, we were guests of the present owners, our Australian friends, Chris and Suzanne Carroll (no relation), who bought the tower in 2010.
From our room on the third floor, reached by a lift no less (or a narrow staircase, legs permitting), we could see the Gleyzin glacier (2697 m.) and snow-covered mountains framed in the massive window. We quickly settled in, then set off to tour the premises.

To celebrate our arrival, our hosts had invited their neighbours Louis and Colette for dinner on the terrace. While drinking an aperitif, we indulged in a game of croquet, with Chris explaining the rules. I had never played and didn’t realise just how cut-throat croquet could be. We blasted each others' balls around the grass or into the bushes in our surge to the winning post. With the game over, Louis suggested a round of petanque, to be played with square balls.

“Square balls?” I enquired, not quite managing to keep a note of incredulity from my voice.

“Oui, oui, c’est vrai; des boules carrées,” (Yes, yes, it’s true; square balls) Louis assured me, a twinkle in his eye. “Because of the hills. If we play with round balls, they disappear down the slopes, never to be seen again. So, we use square ones instead and the problem is solved, no?” he added with a wink that did little to dissipate the feeling he was taking me for a ride.

“I’m willing to give it a try,” I responded, not sure how this would end.

Colette scurried off to her house to fetch the said balls and arrived back carrying a bucket, which she deposited at my feet. “Voila, we can start,” she exclaimed, standing with her hands on her hips and a knowing look in her eye. I observed that the balls were indeed square, or more correctly, cubic, numbered in pairs. I plucked one from the bucket and studied it closely. “10 cm by 10 cm by 10 cm and made from pine,” Louis instructed proudly.
This is a whole new ball game, I thought.

The “ball” certainly felt different in the hand, much lighter by far than the usual steel spheres, but the game was the same. You chuck the thing and hope it lands closer to the jack than the opposition’s balls. I quickly learnt that if the “ball” landed on a corner, whether on the grass or gravel, it would invariably bounce and take off like a rocket into the nearest bush. We all got the hang of it and were soon into the fun of the game, square balls ricocheting in all directions, the tower seemingly watching all that transpired at its feet in benevolent tolerance. The pastis warmed my blood, while the verdant valley and forested hills stood as backdrops to a balmy French evening. 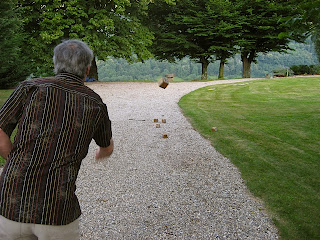 Richard Carroll is a doctoral student in Creative Writing at QUT. He is writing an historical novel based on the life of Tom Petrie (1831-1910).

Another view of the tower is available here.