In the mornings my mother hugs me as if she is pleased and a little surprised to find she has survived the night.

I am at the big toe of Africa, in the seaside village of Fish Hoek, to celebrate my parents’ 60th wedding anniversary. Their house is full of visitors and, ironically, I am sleeping downstairs in the granny flat. My parents are in their eighties and use walking sticks, and I lie in bed and listen to their sticks tok-tokking on the floor above as they move from room to room. Now my mother is in the kitchen washing the teacups, and now my father is in the bathroom, shaving. The tok-tokkie, an African beetle with a hard, polished brown shell, gets its name from the knocking sound it makes with its abdomen on the ground when calling for a mate. Lying in bed I imagine my parents are tok-tokkies calling to each other. Since they are both deaf, this does not seem so ludicrous.

Our days together are taken up by endless rituals, mostly involving tea. But in-between afternoon tea and dinner I persuade them to come for a drive, although my father says he has seen everything there is to see. My mother announces she is keen to go. We decide on the Chapman’s Peak route, a road which was hacked into the mountain between 1915 and 1922 and which falls away sharply on one near-vertical side to breathtaking views of the sea below. But before we get there we must run the gauntlet of poverty and be confronted not so much by beggars as by salesmen selling cheap gimmicks. During the soccer World Cup these salesmen hawked vuvuzelas and colourful flags the size of tablecloths, with an air of celebration; today they are sombre and it’s the dusky avocado they’re selling. Eight for twenty rand. Eight for roughly three dollars. We don’t need avocadoes, but before I can reach for my money my mother reminds that people have had their throats cut by marginally opening their windows. She stares stoically ahead through the windscreen and tells me not to talk to them, while my father shouts “Lock the doors!” from the back seat.

Visiting South Africa is a little like gaining access to a vast and beautiful prison complex, with any number of doors to be locked, bolted and unlocked. My parents’ house has four locked exits before you can emerge from the garage. And when I visit my nephew in Johannesburg I find he lives on an estate enclosed by razor wire and accessible only by boom gate and two security guards. In addition, the entire community of houses is patrolled by no less than fifty guards at any one time. My nephew tells me that when he accidentally set off the burglar alarm, a guard carrying an AK47 vaulted the wall and was on his doorstep in less than two minutes. In Johannesburg everything is exacerbated: the crime rate is higher, the poverty more confronting, the air is thinner and the driving faster and more reckless. In addition, we eat out a lot and party much harder. When staying in Johannesburg I, too, am a little surprised to find myself alive every morning.

For me, visiting South Africa is comparable to a love affair, not only with the land but with the people. Mostly the Africans are a generous people, generous with their flashing white smiles and with their laughter. They have no airs and graces and they accept their lot and make the most of it. Engage any one of them in conversation at, for instance, a checkout till and you can be assured of a warm reception and a laugh. However, long-held enmities remain. Even as I write, Julius Malema, the ANC’s Youth League president, is in court to defend the charge of singing the ANC’s struggle song, “Kill the Boer, Kill the Farmer”. I worry more than ever about the country’s future. I wonder if my father is right.

It is only when I climb the mountains that I feel liberated and, as if I am suffering this time more than ever from claustrophobia, I climb three. (My record is five.) The first is above my parents’ house. This little mountain is where my father wants his ashes to be scattered “just below the rock that looks like a chameleon so that I can keep an eye on your mother.” The other two mountains are more serious climbs: Lions Head, 669m high, to the right of Table Mountain, and Table Mountain itself which is roughly 1,100m. Because I am pressed for time, we take the route of Platteklip Gorge for the latter and ascend vertically up the mountain, not by ropes but simply by putting one foot in front of another for some three kilometres. Over one and half hours later when we reach the top my thighs are trembling and my face aglow with exertion, but the view over the city and the Atlantic Ocean as far as the eye can see thrills me to the core. For the moment I forget about locks and bolts and beggars and avocadoes. I forgot that my father told me that Platteklip Gorge was for people who have no time to smell the fynbos as he put it. 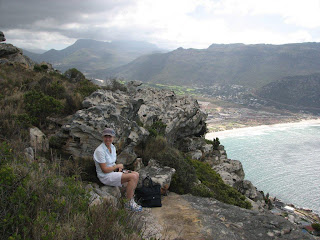 Kathy George studies Creative Writing at QUT.
Note: According to the Oxford Dictionary of Plant Sciences, fynbos is a "South African name for the sclerophyllous vegetation, physiognomically similar to chaparral, that occurs in regions such as the Cape Province."