Letter from the Blue Mountains, by Lesley Hawkes

Recently, I had the great privilege of being taken on a hidden walking trail deep in the Blue Mountains in NSW.  A friend of mine, Susan Carson, had asked if I wanted to accompany her on a walk down the mountains to Eleanor and Eric Dark’s own personal cave hide-away.  We were at Sydney University for a Romanticism conference and it worked out that we had a free day before we had to fly home to Brisbane.

“Sure, I”ll go.  Is it a difficult walk?”
“No”, she replied.  And I believed her.
Eleanor Dark is one of Australia’s most critically acclaimed writers and Eric is often regarded as one of Australia’s first environmentalists.  Varuna (the writing centre in the Blue Mountains) was the Darks’ family home.  However, they also had another home—a cave deep in the valley of the mountains themselves.  Sue had learnt about the cave from her studies on Dark and when she contacted Varuna they put her in touch with Mark O’Flynn, a talented writer and bushwalker from the area.  Mark kindly agreed to be our unpaid guide (I stress unpaid to highlight that this man was under no obligation to wait for us or to show any sympathy toward our general lack of fitness).
The Blue Mountains are a spectacular sight.  They surround and enclose the landscape, almost pulsing with the life they contain.  People come from all over the world to experience first-hand the blue haze that radiates from the enormous structure.  To view them from the top is, indeed, a majestic sight but to experience them at ground level made them take on a very different existence.  These mountains had depth—true depth that buried into the skin of the Australian landscape.  We often view mountains as far-away markers, identifiable boundaries between the land and the sky.  To crawl down into the valleys of the mountains gave me a very different perspective.  I felt as if I was entering into the veins of Australia’s very existence.
The journey down to the cave was extremely difficult.  This was mainly due to the Darks’ refusal to reuse the same trail.  They did not want people following them so each time they went down they devised a new track.  The cave was furnished with mattresses and how they carried these down is a true mystery. The Darks had supposedly spotted the cave from an opposing mountain and it took them over a year to finally track down to it and claim it as their own.  The entrance into the cave is a small crevice in the rocks.  You wiggle through the opening or go over the top of a huge rock and jump down into it.  And there it is: huge rock faces that form rock ceilings, rock floors and rock walls.  These structures jut out over the mountains.  The views over the east each morning must have provided Eleanor with endless writing material.
As I mentioned earlier, Eric Dark is credited with being one of Australia’s first environmentalist, however, it is of interest to note that he used dynamite to blow up a rock face and create a private ensuite for the family.  The rock pool is still there today.
This trail is a secret, not because I feel that I am one of the elite who should know about it but rather the opposite.  I do not know if I have the authority to reveal its presence.  This lack of authority works on a number of levels:  I do not know if the Darks would approve of people entering their natural home and, more importantly, I do not know if the landscape wants people traversing it.  I do not know.  I know I own the experience of travelling down to the cave but the actual physical site itself is not mine to share.  I am not suggesting that the cave is a monument to a past era but more that I do not know all the stories that are alive in this cave.  I do not know if it wants new chapters added to the existing chapters.  It was a spectacular place but it was not my place.  I knew with every step I took over every rock and every tree root—that I was a visitor.  I was being allowed in but I knew I was not in charge of the narrative.  I was extremely relieved when I was allowed to come out of the narrative and not remain lost in a labyrinth of stories that swirl continuously through the mountains. 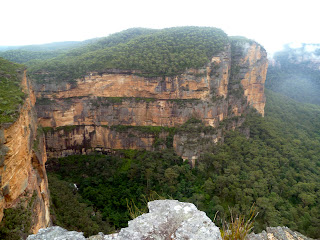