I saw two shooting stars last night,
I wished on them but they were only satellites.
Is it wrong to wish on space hardware?﻿
- Billy Bragg, "A New England"
I turned south at Eumundi and remained on the crowded highway of utes, all bound for Vegas, until I reached the Gateway Bridge with its prison buttresses and, after an hour in the road works, the long views of the Cunningham Highway, the New England highway, and finally the dip in the plateau that brought me onto Marsh St and Cotswold Cottages, perhaps the only motel in Armidale with a copy of Hammarskjold: A Pictorial Biography by Sten Soderberg. I rested, bought a beer, and leafed through the life of my Swedish hero, ashamedly with the criminal intent forming of relieving the motel of this singular possession. 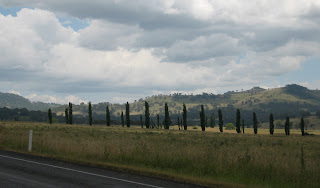 I put it back. An hour later, my fellow-presenters and I, and the 220 female delegates stood to attention as the Earle Page College of the University of New England was acceeded to a government too broke to colonize even its dining halls. For the next three days, we were told, the Icelandic flag would fly above the cream walls of the college. The country women of NSW would voice their allegiance with a small, blue badge that declared them to be "inspired by Iceland". The Country Women's Association (NSW) Country of Study School (Iceland) had begun. 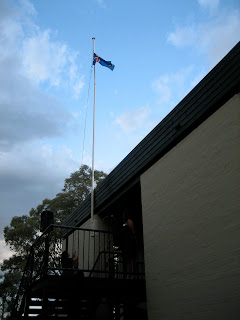 It was a warm night in the dining hall, although I was fortunate on my corner of the "VIP" table in being close to a tall, thin window that whispered faint echoes of a breeze that had done a little to ruffle the Icelandic flag. There were no ceiling fans, a sign that we were in a customarily cool town. But it was hot. The delegates, mostly grey-haired and certainly enjoying the chicken and the trout, fanned themselves with whatever came to hand. But, as someone close to me whispered, only the invited speakers mentioned the heat. And we didn't have to listen to us. The Deputy Mayor of Armidale spoke (the full Mayor was unwell and sent apologies), the Honorary Consul General of Iceland spoke, and the Vice-Chancellor of the University spoke.
Others gave shorter speeches, each commenting on the difficulty of pronouncing Icelandic names, all in pleasant ways getting the Honorary Consul General's name wrong. At the start of the School, the speakers were asked if they would all please begin their presentations with the word Eyjafjallajökull. Sigrún, the first speaker, did so, and as I was the second, with the topic "Sagas of Iceland", I added a translation (Island Mountain Glacier) and a picture of the glacier/volcano taken from Hlídarendi, a famous farm in Njáls saga. The volcano, I said, had erupted in a part of Iceland densely populated with stories of the past, violent stories about remote farms and the rivalries between them.
My case studies were Gísla saga and Njáls saga, and I concentrated in particular on Gísli's murder of Thorgrímur in Gísla saga and two decisions in Njáls saga: Gunnar's not to leave Iceland and Hallgerdur's not to help her husband in his final moments. I said I hoped the audience would understand the domestic tensions represented in these moments, bad family situations that made good literature. I also joked that mine was perhaps a more noble-minded audience than the original, medieval one, but at the end a retired teacher tapped me on the shoulder and said, "Don't worry about us. We understand infidelity and betrayal well enough." 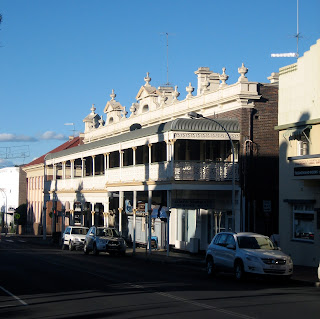 I liked the women there very much, because they were interested in a way I had forgotten students could be interested. Many approached me during scones and tea to comment on my presentation or to ask questions. I had focussed for some of my time on the layers of composition and history that we find in the sagas, and this fairly technical consideration received as sympathetic a reception as my retelling of the family feuds.
Perhaps that reflected a common point across the two islands: as in Iceland, historical consciousness here was layered, and each layer in the national story could never quite colonise the others. The awkwardly stated acknowledgment of the traditional owners of the land; the farm histories and the remoteness that grows despite the crowding in of technology, of social networking sites; the domestic history of the women who will return to the small towns of NSW and present their notes on Iceland; the men they'd left for the weekend; the younger women who couldn't come; the small group of migrants who held the stage for two days. 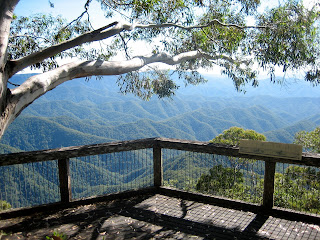 On Sunday I drove back to Brisbane via Bellingen. This allowed me to stop at the lookout at New England National Park, which I had to myself. The lookout, in this picture clipped by white gums and the shadows of mid-morning, presented an illusion, a scenery too vast to accept, and so I concentrated on the small birds that followed me down the paths and then danced across the view. 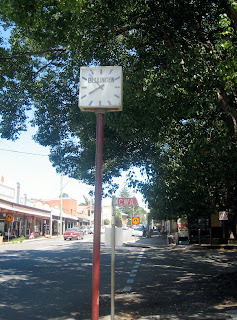 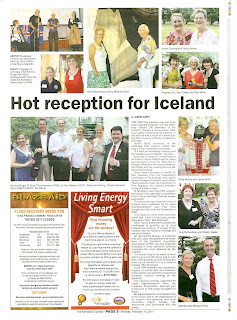