A little while ago, my mother, who babysits for us a couple of days a week, noticed that we had a visitor. In the afternoons, when the light on the tall grass behind our townhouse in Brisbane begins to brown and soften, a small wallaby with auburn fur appears and makes a snack of something that lies about ten feet from our clothes line. What is that Robert Frost line? – something there is that doesn’t love a wall; in this case, let’s say that something there is that loves our clothes line.
And we love him (I call it a him, although I don't really know). My young sons, of course, are completely entranced, but dare I say that they don’t appreciate the magic quite as much as us adults, who’ve become accustomed to not seeing wildlife in such close proximity and with such confidence about us. I suppose he has been checking us out for months, because now that we have finally noticed him, his body language expresses a kind of about time attitude.
And suddenly the same hill that we back onto is the source of a seemingly endless torrent of rain water, which swells at the base of our townhouse and eventually makes its way into the garage: something there is that doesn't love a wall. Water does not like my garage wall.
Perhaps predictably the papers have called the last weeks of flood biblical, and it doesn’t help that we know that the worst (for Brisbane) is to come on Thursday, when the flood waters will exceed the records set in 1974, when the city had its last great flood - it is coming, predicted. Are the papers asking whether we are somehow at fault? Or is it just that there isn't another way of describing a really, really big flood.
And, anyway, Noah probably had more to worry about than God’s judgments. He also had a boat full of animals, who, if not entirely spared the condemnation, were at least permitted coupling survivors. I have been wondering whether our visiting wallaby has a mate in the hill behind us, and whether they have heard me digging out the clay detritus behind my garage wall, the sludge that comes down the hill and raises the water levels.
The story of the arc is, I suppose, the story of how human and animal pathways meet. I am waiting for the wallaby to reappear after the floods have subsided and the grass is again faded by the harsh Brisbane sun. 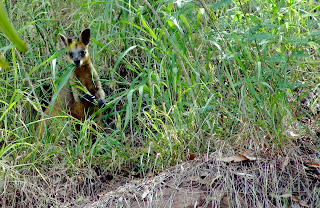