Deep & Deeper: A Letter from Brisbane

We’re drawing to the close of a day when, thankfully, the water level has peaked lower than earlier forecasts had predicted. There is some reprieve for at least those who are on the margins of the floodwaters, where it is still lapping against front doors. In the most extreme emergencies, homes have been picked up and washed away. Today, one hopes, marks the end of such disasters and so the end of the first climax of the crisis as a whole, the flood peak. But immediately another story begins about the extent of the damage and its future impact on Brisbane life. The climax of that story is a long way off.

I went down to Rosalie and Milton today, well-known parts of the inner suburbs of Brisbane. From the University of Queensland campus at St Lucia through to Toowong, Auchenflower and Lang Park, a large football stadium, homes and business have been inundated. Like everyone, I’ve followed this on the ABC’s 24-hour coverage, but more urgently on Facebook, where my friends and colleagues regularly post pictures and videos of lost University streets, the parks and cafés of my student life, and most depressingly their own homes under the watermark. There’s a grim sequence to the status updates: losing power; the water is close; being told to evacuate; staying with friends; have heard my street is going under.
Common to a great many of the accounts that I’ve heard is the feeling that this is too surreal for words. I wasn’t entirely sure what people meant by this until today at Rosalie village, one of the worst-hit areas in my part of town. I go there all the time: my two young sons love the playground at Milton State School and the other parents there are easy to chat to—recently, I bumped into Matt Condon, the author of Brisbane, a memoir about the city that suddenly needs another chapter. There are two ice cream shops close by, and after ice cream you cross the road and pick up a loaf of bread at the bakery and a hot beef panang at Sing’s. It’s a rather too-fashionable area, yes, but in an Australian way: I’ve seen Darren Lockyer, a footballer, and news reader Andrew Lofthouse picking up their lattés there, but nothing more than that.
We lived there for six months after we first got back from Iceland. Finnur, my older son, had just had his first birthday. Each morning, we walked through the shops, at the bakery bought a biscuit for Finnur and a sausage roll for me, and then spent an hour in the playground before returning to our apartment, the sun normally becoming too strong by nine or ten. 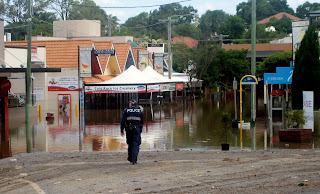 And here, pictured left, is what we found this afternoon. A pond formed in among the shops, fitting perfectly and seemingly turning the village into props, water features.

Unheimlich, I thought, is what people mean when they say it feels surreal. Or at least that is the feeling that I experienced down at Rosalie village this afternoon: the uncanny sense of seeing a world as familiar as this one turned into a different world, with all the qualities of its former incarnation still present.

And the uncomfortable strangeness of it was very present in the small groups of sightseers that gathered at the police parameters. It was carnival, certainly, if without the sense of celebration or abandonment then with all its bemusement and upsidedowness. And it was this spirit of good-willed, quiet bemusement that suddenly, for me, made true the ceaseless media claims that have inevitably followed the flood, that tell us that the flood will make us stronger, draw the community together, help us to re-asses what really matters in our lives. Actually, the flood has brought out the quiet irony and good will of Brisbane people, to me ever-present qualities.

What is the deeper meaning of a flood? My first impulse over the last three days has been to answer that there is no deeper meaning. A flood is a body of water that disrupts our lives, while a body of water that doesn't disrupt our lives is merely a river, a lake, an ocean. But this evening I'm not so sure. The erasure is incomplete, and the familiar remains alongside the foreign. It's disquieting, uncomfortable, but it also brings a strange sense of recognition. 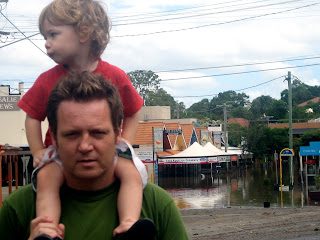