I don't often get to recommend an interview by two friends, but this one with Jeffrey Poacher and Martin Duwell, published in the latest issue of Jacket magazine, makes wonderful reading. Here is some of what Martin had to say about writing poetry reviews:
Friends often ask why my reviews aren’t more evaluative. They see the central question that a critic faces as being: Is this any good? Or, where does this fit on some scale of quality? I’ve never thought this was a major question when it came to reading poetry, though I know that, in a practical sense, it can be an important question for readers of reviews. You know the kind of thing: I only have so many dollars to spend or so many precious hours free, please tell me what to spend them on. I’m guilty of this myself in fields where I’m an outsider. As part of an attempt to be more au fait with the music of the last century, I read a lot of critical material but the most useful was a collection of reviews by the late Alan Rich which contained as an appendix (accompanied, I seem to remember, by exactly the kind of moaning that I’m producing now) his list of the hundred best works of the twentieth century. At a practical level that was terrific because you could say: here are a hundred works to build my listening around. 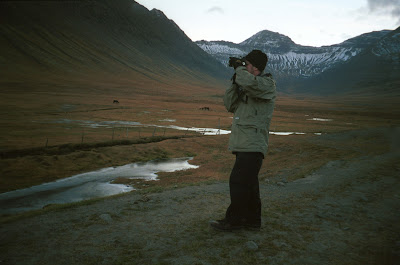 Martin Duwell, pictured here during a trip to Haukadalur in Iceland that he and I took in 2001.
Anyway, for reasons that I don’t fully understand but which may involve the fact that I come from an academic background or that I am one of the few reviewers of poetry who is not a poet himself, I resist the idea that reviews should be evaluative. This irritates friends who are poets because they would like to see what they are inclined to call undergrowth being torched by the flamethrower of critical truth (it’s amazing how consistent their metaphors are). But of course their real reason for wanting the “undergrowth” cleared away is so that they themselves can be seen to better advantage and the precious book-buyers’ dollars will be more likely to be spent on them. They also often quote Yeats’s famous comment at the Rhymers’ Club, “The one thing certain is that we are too many”. All I can say is that, in my view of creativity, there can never be too many genuine poets.