The English politician Edward Heath had commercial success in the 1970s with the travel books Sailing, Music, and Travels, but the critical reception was far from warm. Paul Theroux's response, "Round the World in 80 Clichés," is included in Nicholas Parsons' Dipped in Vitriol, a 1981 survey of "hatchet reviews of the arts through the epochs." The Theroux review not only tells us what's wrong with Heath's approach, but also with lazy travel writing in general. Here is part of it:
Ever since he left office, Mr Heath has subjected his public to a kind of relentless reminiscence about his pastimes. Bachelors are such singleminded hobbyists. After Sailing and Music we have Travels, and before long no doubt we will be privileged to witness Mr Heath signing even more titles about other chaste recreations.


[...]
This [book] is almost entirely a record of happy days abroad, for however exotic or distant the place, what Mr Heath requires is a good meal, a hot bath, a night's sleep, solid comfort -- no crowds, no awkward temperatures (he always reports whether a place was hot or cold). His time in Venice is typical: he spends his time 'exploring different churches' -- the churches are not named; he eats 'meals' -- no dishes are listed; he stays at a 'hotel' -- he does not say which one. And, 'I was captivated by Venice.' I was not captivated by Mr Heath's Venice.
But travel writing is a funny thing. The worst trips, in retrospect, make the best reading, which is why Graham Greene's The Lawless Roads and Kinglake's Eothen are so superb; and the most comfortable travel ('There was invariably split-second timing and exact positioning as they drew up at the steps leading to the red carpet and the welcoming party') becomes in the telling little more than chatting or, in Mr Heath's Travels, smug boasting.


[...]
Mr Heath has been promoted as a man of wide interests. You name it, and he has sung it, or sailed in it or been there. He is a statesmanly combination of Toscanini and Joshua Slocum, and now he is an indefatigable traveller. He laments that as an official visitor he has been unable to see much of the 'day-to-day life of the people'. And yet here he is in Kenya at the time of the Mau Mau troubles. He praises the chintzes at Nairobi's Norfolk Hotel, and the carved doorways in the old Arab Quarter in Mombasa ('The only attractive part of town') and the coconut trees. In a twinkling he has had enough of the day-to-day life of the people and he is up the coast: 'I enjoyed excellent bathing.'


[...]
But is this travel at all? The Arab Quarter is attractive because it has carved doorways, and worthy of mention because it is attractive. If you can have a swim and a good snooze, yes, Mr Heath says, that's travel. And here is Aden: 'Aden was quite different. The colony existed largely to meet the maritime need for oil, as it had originally done for bunkering coal. I can remember little attractive about it.' 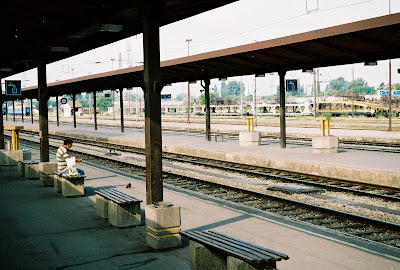