My sister Fríða, who lives in Reykjavík, has sent me this picture of Saga Land ensconced in piles of saga-related titles at Penninn Eymundsson bookshop in Laugavegur, the main shopping street that runs to the pond and old parts of town. 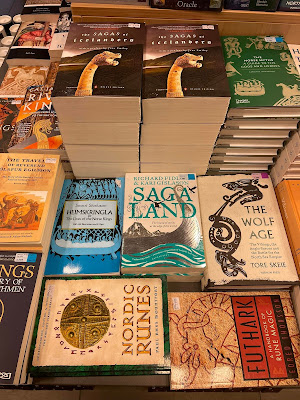 I wrote Saga Land with my friend Richard Fidler after we'd travelled in Iceland. It's rather compendious in nature, telling different kinds of tales - sagas, family stories, biographies, and history. In one chapter, I give a short version of The Saga of Gísli. In a way, doing so led to The Sorrow Stone, for it is an expansion of that chapter from the perspective of Gísli's sister. Although I'd been interested in her since I first read the saga twenty-five years before, re-telling her story in Saga Land was a first step in internalising it in a way that is needed for a novel.

Most of my writing has evolved in this way, that is, as related works that seem to respond to each other, as well as to earlier texts. As a creative method, it offers dialogue between stories, and expansion, even a sense of one's works as siblings.

On Thursday evening, I gave the second of three library talks I've been asked to present about The Sorrow Stone. This one was at Bracken Ridge, a suburb on from Brighton, where my mother and I first lived when we migrated to Australia. Going back to childhood places is often a mixed experience, but I love visiting this part of Brisbane, which at the time we migrated felt a little cut off from the world, but now strikes me as idyllic - if also still separate.

The library presentations have small audiences, and so there's opportunity for discussion. I half-expect no-one to say anything, but both talks so far have ended in lots of questions, many of which also take me back to Saga Land material: the history of the island, the fascinating early society there, family ties, the country's geography and isolation and how these might be linked to storytelling.

The third of these library events is at Carindale on Thursday 28 April.

After a run of good reviews, The Sorrow Stone has received a less positive response from Catherine Ford writing for The Sydney Morning Herald. She finds the plot and its transitions confusing and isn't convinced by the narrative voice, which she suggests is too much my own. While it's never enjoyable to read a negative review of your work, as here criticisms often touch on one's own concerns. Voice and plot complexity were the biggest challenges in writing the novel, and so I'm sure there will be others who also feel I didn't get there in the end. The review is available here.