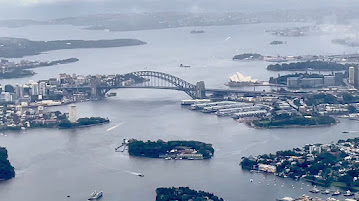 I wasn't sure I'd get to make this trip. The flooding we had in Brisbane was moving south and threatened to postpone it, just as my book event at the Brisbane Powerhouse last weekend. On Thursday morning, when I was due to fly, a thunderstorm closed in on the airport, causing delays. But we were eventually allowed to take off into the dark clouds, the plane bouncing heavily until we cleared them, and our approach into Sydney was smooth. The harbour appeared with its unwavering optimism, if a little greyed by clouds and passing showers. My publicist Jean and I started our travels across the city at the lovely Bookoccino in the seaside village of Avalon, the first of twenty-two bookshop visits we're making in Sydney. It sounds like a lot (and is) but actually it's an enjoyable way of exploring the city. I get to meet booksellers and if they want we can talk about the book; I sign some copies; and, I love hearing about their shops and trade and odd bits of industry news you pick up. Going to so many bookshops also allows you to appreciate their individual character, their bearing in a street, how they reflect a neighbourhood and offer a place of retreat and calm from it. Bookshops abound with personhood and memory.

The only downside, perhaps, is having my photo taken a great many times. I imagine I must look a bit ridiculous, standing there beside a pile of my own books, but such is the social media age.

On Friday, in between bookshop visits, I spoke at Dymocks Literary Lunch - a series that's been running for some thirty years - and, while we've been on the road, have received more first reviews of the book. This morning, Daniel Keene in The Saturday Paper has written a wonderfully positive piece, including this:

In lifting Disa from the densely populated weave of the Icelandic sagas and teasing out her story from their tangle of kinships and events, Gíslason has given her a rich emotional life. She is a secondary figure in a saga of blood and honour – of men killing men – but here she stands centre stage. The narrator of her own tale, she has a complex inner life, capable of deep, abiding love and implacable anger. Like a shard of pottery dug out of the earth and brought into the light to reveal its true shape and colour, Disa’s story is given its true emotional weight and human consequence.
Gíslason’s prose is wonderfully controlled; it can be as stark and harsh as some of the landscapes he so beautifully describes, and at other times is imbued with a quiet but deeply felt lyricism.

Disa ponders how swiftly news travels from house to house, community to community, how stories spread across the country “like the wind into a hall when two doors open at once”. Gíslason unlocks and opens the doors to Disa’s story, and it might just blow you away.

I've started collecting excerpts from this, and other reviews that are appearing, here.