I've spent the last couple of weeks travelling in Iceland on the trail of two medieval sagas - The Saga of Gisli and Eyrbyggja Saga. The two works are closely connected by geography, as well as by a couple of the characters who exit the terrible events of one saga only to be cited in the occurrences of the next.

My journey's taken me first to Haukadalur, a valley in Dyrafjördur in the Westfjords which I've visited a few times before but never stayed at for more than a few hours. This time, I rented a cottage in the valley that used to serve as the local pre-school, now converted into a holiday home. 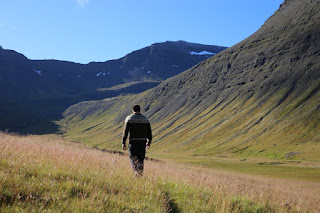 I spent some days walking: up into the valley itself, but also around other farms and places mentioned in The Saga of Gisli, such as: the site where the local assembly used to be held; Undir Hesti, where Vésteinn (Gísli's best friend) lived; and, Gemlufallsheidi, where Vésteinn famously decided to ride on to the autumn feast being held by his friend despite a warning to stay away.

When I left Haukadalur, I drove on a slippery mountain road south to Tálknafjördur, where one of the saga characters came from: Asgerd. The fact that she's from this particular fjord isn't a big deal in the saga, but the more I read this work the more concerned I've become with its precise geography. So, I went and found rather lovely beaches braced by great blocks of mountain cliffs. Asgerd's farm was, as in many parts of the Westfjords, wedged along the rather thin strip of usable land.

Throughout the trip so far, I've been struck by the interchange of inhospitable country - heaths, volcanic mountains, and cliffs close to the sea - and suddenly-appearing pastures.

Hvammur on the northern shore of Breidafjördur (not far from where the Brjánslækur ferry comes in) is one such place, a fertile part of the coastline in-between the rock mountains of the Westfjords and the pink, sandy volcanic dunes further along the fjord. It's where Gisli's brother Thorkel lived after Gisli was outlawed, and where Gisli came to ask him for help while he was living on the nearby Hergilsey Island.