Letter from Vietnam, by Bernard Appassamy 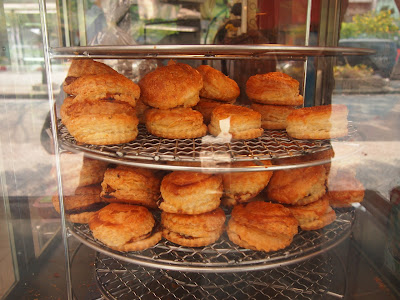 In transit at Tan Son Nhat International airport, I felt a shock, albeit of delight, reading a sign inside the cafeteria: ‘Bánh patê sô/ pâté chaud’.

Like many Mauritians brought up as Catholics, my childhood on Sunday mornings was marked by pastries after mass at the patisserie inevitably located across the road from the church. Pâté chaud could be found at Patisserie Unic across from our parish church, Notre Dame de Lourdes in Rose-Hill and Patisserie Golden across the Sacré Coeur church in nearby Beau-Bassin. But the absolute best, stuff-of-legend pâtés chauds were sold at the aptly named Sainte Thérèse Patisserie in Curepipe at the centre of the island.

Not to be confused with hot liver pâté, pâté chaud is a round puff pastry with crinkled edges and a piquant minced meat and onion filling cooked dry. Always served hot, the pastry is crisp on the outside and flaky-moist on the inside. Whilst in Mauritius the meat is invariably beef, it can be pork or chicken sometime mixed with potato mash in Vietnam. Originally from Brittany in France, it would seem to have disappeared from France.

While still living in Mauritius as a young adult, my first experience of Vietnam was through the sound of Indochine, a French new-wave rock band with oriental chords reminiscent of The Cure. Launched in 1981, Indochine remains France’s biggest selling band overseas. In 2006, to celebrate their 25th anniversary, Indochine played in concert with Hanoi's Symphony Orchestra at Hanoi’s Opera House, a smaller copy of the Paris Opera Garnier. Perched above that same stage for a Christmas gala concert, I pictured Indochine’s provocative '3 nuits par semaine' (3 nights per week) and '3eme Sexe' (3rd Sex) lyrics being sung to a most likely unsuspecting audience.

A few days later, in the remote village of Lat in Lam Dong Province, I found myself listening with astonishment to nursery rhymes I had not heard for close to fifty years, 'Il y a un rat dans le grenier' (There’s a rat in the attic) and 'Sur la route de Louviers' (On the road to Louviers). That same day, back in Dalat and over dinner at ‘La Grenouillère’ restaurant on the edge of Swan Lake, I recognised 'Petit papa Noel' coming through the speakers in Vietnamese.

My time in Vietnam was punctuated with such flashes of familiarity. Those cultural beacons drew parallels between the common French colonial past of our two countries, but also dug up sketchy memories, like a horizon abruptly brought into closer view. More than the pâtés chauds, Vietnam gave me a forgotten taste of Mauritius.


The author:
Bernard Appassamy is a Sydney-based artist and writer. Some of his other work can be found here.