It's the last day of a short, second journey that I'm making to Tübingen, where I have been collaborating on an article with my friend and colleague Stefanie Gropper. We've met for two hours a day at a corner table of Schone Aussichten, a cafe on one of the town's two main roads, Wilhelmstrasse. The name of the cafe means something like 'beautiful view', with the double meaning of not only the view you see (here, a pavement busy with students and bicycles and then the park on the other side of the street) but also your prospects more generally: 'a good outlook', I suppose, in English. 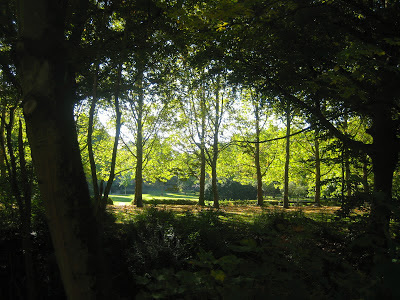 Stefanie and I are writing about conceptions of authorship in medieval Iceland, a topic that has either explicitly or implicitly stood behind most debates about the Icelandic sagas, in some measure because the sagas themselves don't have much to say about it. Saga authors remain anonymous, and there's no medieval account of saga composition for us to consult; there's plenty of room for modern scholarly curiosity.

My days have been divided between these discussions, my own work on the article, and long walks around town. My thoughts have sometimes drifted to language and why we write, and what aspects of language and composition are common across the ages. In the evenings, I've attended some of the jazz concerts being held this week - my visit happens to coincide with Tübingen's Jazz und Klassik Tag, an annual festival that itself coincides with one of the most beautiful times of year, what the locals refer to as Golden October.

T. S. Eliot used the phrase once, as well:

And the apples were gathered and stored, and the land became brown sharp points of death in a waste of water and mud.

- Murder in the Cathedral 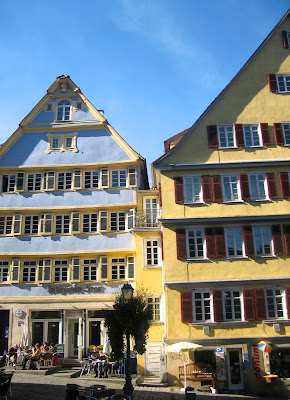 But Tübingen's not there yet. In fact, the decline into November has seemed but a distant threat during day after day of glorious sunshine. The temperature has been in the low- to mid-twenties, and if it weren't for the fact that the gold in question refers not only to the sun but also the leaves whose colour intensifies but also declines with each day that I'm here, then you might think that this is another summer, a repeat. The slightly confusing thing is that the world is so heart-stoppingly beautiful during one of its stages of retreat. But maybe that's a connection to language and composition, which in a way mark points of retreat from the world in order to represent an engagement with it, and to comprehend its beauty. At least, wasn't that how Wordsworth figured it?

Language is what stops the heart exploding. Or as TS Eliot puts it in Murder in the Cathedral, "This is one moment / But know that another / shall pierce you with a sudden painful joy."

- Jeanette Winterson, in The Guardian 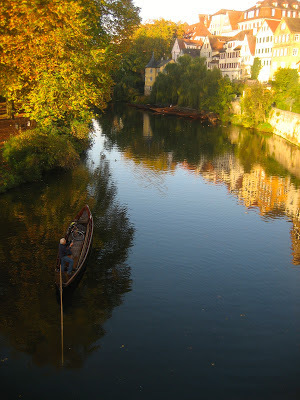 Yesterday I went for a very long walk in the nearby Schönbuch Park. My target was the Cistercian monastery at Bebenhausen (established in 1183, or thirteen years after Thomas Becket's death, the murder in Murder in the Cathedral), but as is usually the case with me I got completely lost. I can't say I minded all that much: it was a free Saturday and it suited my mood to wander in the woods without any clear sense of direction. At one point I ended up in a village, where I bought a pastry and a bottle of water and watched a father and his daughter collect apples, and then moments later I found a sign directing me to Bebenhausen. 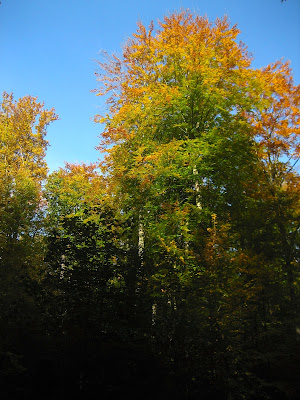 After I walked around the monastery, I stopped at a small guesthouse for a pils ('it takes seven minutes to draw') and cold meats with bread, and then followed the tracks through the woods - suddenly it was impossible to get lost - back to Sand, one of the entry points to the park.

T. S. Eliot, Winterson, autumn: they were right. Language bears the entire cycle, like each of the seasons. The golden days of October remind us of the summer just gone, but also of the spring. 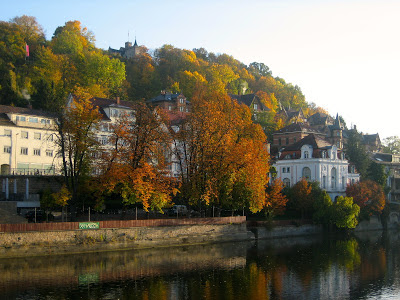 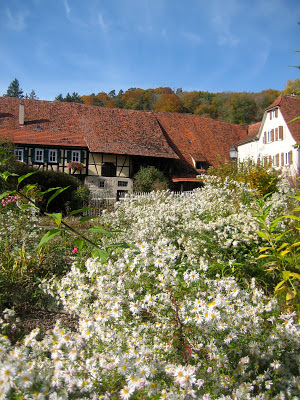