Letter from a Rainforest, by Bernard Appassamy

Almost every night around dinnertime, our kitchen echoes, beyond the inner city hullabaloo, the modest but no less persistent singing exercises of a nameless neighbour in her backyard. I imagine that others in our vicinity were also initially puzzled if not slightly irritated by the intrusion. Another neighbour went as far as loudly voicing his disapproval in an unmistakable way. But our local diva was not to be intimidated; she has carried on, and we have all grown accustomed to her dusk ritual and notice when she's away. 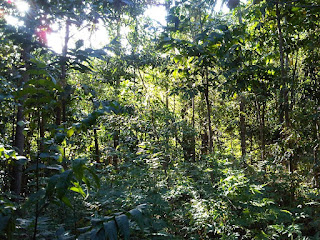 It has recently been my experience during a holiday in the Northern hinterland that rural life is not as sedate as I had pictured. This was to be my First Contact. I come from tiny and overpopulated Mauritius where almost every square metre is accounted for. The house of my hosts, amongst 50 acres of ‘rainforest in recovery’, was one km from their gate. I was beside myself.

‘Be warned. The accommodation is squalid’. Think wooden shack where my friends slept and corrugated iron shed one hundred meters away where I did. Think shed with no water or facilities. Think tilting door stuck open. Think four brown snakes found inside the shed over the previous twelve months, two meter resident carpet snake in the nearby herb garden, spiders, rats, mice, possums and wandering bears all queuing to snuggle up with me.

I immediately embraced the three dogs, Peggy, Rex and Sammy and bribed them into sleeping in the shed with me. To keep any wildlife away, I gratefully put up with them scratching, farting and poking their wet nose at me through the mosquito net at 3:00 am -- ‘Surely you want to play?’.

5:04 am. Outside, to the left of my bed, a Kookaburra tore through the timid morning. I tossed over, stunned how deafening one single bird could sound. Immediately, the batham rooster from the pen on the right hand side cleared his throat and replied. Soon, the two ducks and their eleven ducklings made their way to the slide and pond. I shoved my earplugs in but in vain, the whole forest was bursting.

I should have guessed about the pit toilet. ‘Shove some straw in once you’re done’. I was not really there. This was not happening. I looked straight ahead, not sideways or down – especially down. I had hardly managed to rest my derrière when the three dogs raced in the toilet (did I mention there was no door?) and jumped on my lap. I roared amidst the choking laughter of my friends in the background.

The menagerie also comprised one cat, three chickens, and three peacocks. One night, I meticulously cleaned the gas barbecue before starting to cook when the male peacock flew to the tin roof above me. I felt flattered that he wished for a closer look of my grilling actions and chatted to him affectionately. He glared at me and, in one brazen tail movement, defecated all over the barbecue. I grabbed the fantastically long country hose and ran after him giving him the shower of his life.

I was taken on a walk beside the river on the property towards the waterfall. My vision of a Merchant Ivory lace parasol promenade tumbled into ‘The Mission’. The water levels had of course tripled since the last floods. We jumped and fell across slippery, wobbly rocks, and were soaked to the waist with our top half drenched in sweat. I scanned my arms and legs anxiously for leeches while the dogs bounced like Cashmere goats. The back of my ears was attacked by mossies. I would have killed for three baklavas. I felt twice my age and wanted to give up. ‘We’ll just leave you to die here’.

Back in Sydney, I settled reluctantly. That holiday within that rainforest felt like being inside something that was both alive and life giving. I measured how much city living takes away from me.

By the end of my sojourn, whilst on the throne, the dogs sat at my feet and I read them our horoscope for the day. At 3:00 am, I capitulated to them and went for a stroll to feel the stars on my face.

I still miss the scents and butterflies. I miss picking the fresh eggs and snake beans. More than anything, I miss that quiet moment when we finally sat to watch the thundering waterfall. These days, when our neighbour starts singing, somewhere in her voice, I can also hear the rainforest. 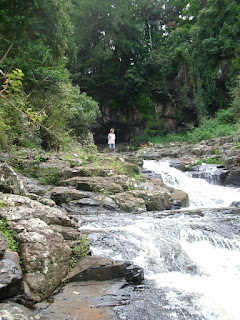 Bernard Appassamy is a Sydney-based artist and writer. Some of his other work can be found here.