We leave the Mizunos' house in Saitama at 4am. It's a two-hour trip to Mt. Fuji from outer Tokyo, and we are aiming to get there at dawn. It's early January, seven below zero, and packed into the car are a number of puffy jackets, blankets, snacks, four cameras, Mr. Mizuno, Mrs. Mizuno, my boyfriend James, and me. We are going to the mountain to take photos at dawn.

I am the second generation of clueless foreigners to be taken in by the Mizunos and overwhelmed by their limitless kindness. They met my parents in Sapporo in the late eighties when they both missed the bus to the top ski fields, and adopted them so thoroughly that my grandparents on both sides have met the Mizunos and their children at least once. Now, twenty five years later, they have helped me through my semester at Komazawa Daigaku, booked for me my half-thought-out trip to Hokkaido last summer, acted as guarantor at the start of the lease of my apartment, and seen my Japanese go from intolerably awful to awful. Kaori, their daughter, has a five-year-old, Kanato, and a three-year-old, Hiroto, who apparently love me and will allow me to "teach" them English (lessons usually consist of jumping on and off the bed and describing these actions: "Big jump! Little jump!"). And now they are driving me and my on-holiday, photographically-inclined boyfriend to Fuji-san at four in the morning.

To be fair, for the Mizunos, it is not an infrequently made trip. Mr. Mizuno will, with any excuse, enthusiastically show off the collage of photos he has taken of Fuji, at sunrise, sunset, and in all seasons, with his point-and-shoot. James has brought his DSLR and his baby, a 1952 Rolleiflex twin-lense reflex. It feels like a school excursion. We stayed at the Mizuno's house last night, where Mrs. Mizuno plied us with curry and rice and beer and salad and mandarins and glace chesnuts, drew us a bath in their magnificent, state-of-the-art Japanese bathtub (it reheats the water for you!), and then piled the two cot beds upstairs high with blankets and continued to fuss about whether we would be warm enough (I woke up in a pool of sweat).

There is nothing to see outside. Dawn won't break until 7:13. I fall asleep immediately, feet jammed under James's legs. When I wake up, it's ten to six, and the Prius is bumping down a gravel drive to a parking area by a lake. It's still dark outside, but I can see, as the headlights sweep over them, two rows of cars already parked here, and in front of us at the lake shore, a line of tripods, all alien-legged and silhouetted in the gloom.

It is freezing outside, and the ground is covered in frost. My feet ache instantly. Mr. Mizuno gives me thick nylon pants to put over my jeans, and I wrap myself in the blanket I was sleeping in. The sky over the lake is deep green, and we can see the shadow of the mountain, smooth-sloped and level-topped, a clear, flat shape beyond the glassy water. The lake is surrounded by hills, bare and brown punctuated by solitary evergreens, and the grey morning is crystal clear. We stump down to the water's edge to find a spot. It is a competitor's sport. There are already ten or so cameramen with tripods marking their territory, wrapping their cameras in little blankets and putting hot packs on the mechanisms to keep them from freezing up. There are films of ice stretching out from the gravel shore, and tiny little row-boats drawn up just out of the water's reach. There's still snow in some of them. The pair of photographers next to me mutter to each other; aside from that, it is absolutely quiet. Not even any birds.

Mr. Mizuno has disappeared to find a better spot. James is flitting from boat to boat, trying to find a flat platform on which he can rest his Rollei for a long-exposure. Mist rises off the lake in great wreaths near the opposite shore. It's so still, the water so calm, and as the sky lightens and the mountain's edges crisp up, so does its reflection. It is a perfect double. I begin to understand the love people here have for Fuji-san. The guy who painted those three hundred or whatever views of it, the cartoon Fujis on the maps of the shinkansen routes, the Fuji-shaped cups, hats, bakery products--it deserves its status as a national icon. This perfect cone volcano, huge and flared like a trumpet bell, its top dusted with snow year-round--as it comes into view, it doesn't seem real. It looks like a photocopy of a colour picture, pasted to the sky. I can see the rivers of snow reaching down its flanks like veins. It's strange to finally be here, after a year of plodding away at real life in Tokyo. I will be going home soon. The Mizunos would never let me leave without seeing the spiritual heart of Japan.


Behind me, James is receiving advice from two of the seasoned photographers. James doesn't speak Japanese. I go to translate. The men are baffled as I relay their advice (he should use a tripod, or his shaky hands will blur his Rollei's pictures). A white girl understanding Japanese is unusual enough; a white girl translating for someone who looks like a local is maybe a bit much to handle, at 6:30 in the morning.

The sun is due to rise over Fuji's left-hand edge, near the bottom of the slope. The birds have finally started up--crows, mainly, their ragged calls puncturing the brightening morning. I take a photo just before there is a breath of wind, and Fuji's reflection is scattered. It's beautiful, the shattering light blurring the edges, and the lake water lapping under the ice. Later, cause unseen, a series of sizeable ripples approaches, warping the reflection evenly. One of the photographers springs to catch the image before the returning waves muddle it. The mist over the lake breathes side to side, and a single tuft of cloud treks from one edge of the horizon to the other (later, Mr. Mizuno will say it was 'kirei sugiru'--too pretty, too clear; it's better with a few clouds). 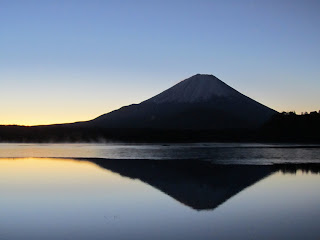 I am still swaddled in my blanket like a baby. Mrs. Mizuno comes down from the car with bundles of clothes and insists on James putting on a puffy jacket under his coat. She forces me into a green fleecy and a pair of gloves, and then goes to find Mr. Mizuno. My feet have lost all sensation. I give up jumping up and down and huddle under James's arm. He points behind us: the top of the hills have flushed vividly. The top of Fuji, too, catches a shaft of red light. Faint cloud clinging to the peak like a breath glows pink. The sun is coming. The people on the shore stride back to their cameras; affirmations and warnings of readiness are exchanged. At the base of Fuji's left-hand flank, the sky is brightening.

Soon, our sixty seconds of photographic opportunity will rush up on us, and the sun will pop over the mountain side like a ball on a string. But now, hands warm in Mrs. Mizuno's gloves, surrounded by old dudes with fingers on shutter-buttons, holding their breath, I let the morning twilight seep into me. Pale-blue, clear, the sun hinted at but hidden, and Fuji-san crisp and austere before me, like watercolours on Japanese silk. 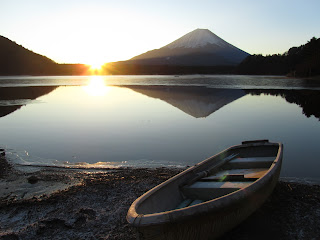 Sam George-Allen is an Honours student in Creative Writing at QUT.