August 24, 1961 is the date of Hammarskjöld's final entry in Markings, and like most of the entries for 1961 this one is a poem. Here is the second verse:

I awoke
To an ordinary morning with grey light
Reflected from the street,
But still remembered
The dark-blue night
Above the tree-line,
The open moor in moonlight,
The crest in shadow.
Remembered other dreams
Of the same mountain country:
Twice I stood on its summits,
I stayed by its remotest lake,
and followed the river
Towards its source.
The seasons have changed
And the light
And the weather
And the hour.
But it is the same land.
And I begin to know the map
And to get my bearings.
(Markings, p. 181)
Many of the themes of the collection as a whole are gathered in this verse: the night and its dreams can take you back to a landscape where you felt a greater sense of belonging, but out of that projection back comes a more acute sense of isolation and uncertainty about life as it goes on in the present moment. The country that features in your dreams 'is the same land' - it has remained in place for you - but it is also remote. In a dream, you get your 'bearings', while outside there is the 'ordinary morning with grey light / Reflected from the street'.
One hopes that the dream and the street outside are related. As Auden writes in the foreword to the collection, Markings witnesses an 'attempt by a professional man of action to unite in one life the Via Activa and the Via Contemplativa'. And perhaps after all the 'map' exists both in your dreams and when you rejoin the outside; it becomes one form taken by the road markers that lie between action and contemplation. 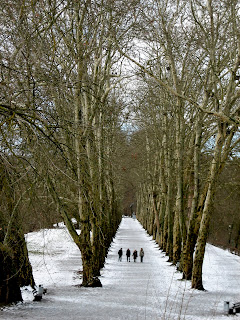