I return smiles as I walk past a dozen quiet guests in the living room. I reach my grandma’s bedroom and pull the door open. I see her lying on her new bed. My parents, my sister, my little brother, my aunt, who arrived from Taiwan two days ago, and two uncles, whose flights from Canada just touched down this morning, fill the space around her. Everyone spares me a glance, then they turn back to observe grandma’s last moment. I move to a dark corner and stare at her pale, wrinkled and limp body. I watch her dried lips open and shut as she takes in air. Then I am lost in thought. I wonder if the stories about flashbacks before dying are true. If so, would she think of me? Memories about grandma sweep through me, a twenty-three year journey that my grandma and I share. Maybe that explains why I am the only one who sheds no tears.

I remember running home shoeless one day. It was Lao boys’ uniform expression of rush. We believed running barefoot could boost speed, but the stones on the unpaved path slowed me down; walking might be faster. I hoped grandpa would be asleep when I got home.

Facing the old white door, I tried to control my breathing. Once it slowed, I carried out my plan. The aim was to get to the bathroom and clean up all the evidence.

I tiptoed my way through. The door of the bathroom was in sight. It urged me to run, yet I was mindful of the noise the old wooden floor would make. Patiently, I continued. Suddenly, behind me came a sound of a stick slicing the air. I knew that sound well. I fell to the ground, crying even before my grandpa could issue his commands.

I turned and saw grandpa stood holding the stick in his right hand. At the sight of it, I found his command impossible to obey.

“Stop crying at once,” he repeated and smacked the stick at the back end of his pants, displaying its might with that awful sound.

I hid my dirty feet and hands. I looked him in the eyes, and cried for my life. Nothing helped. He raised the stick higher, and I cried louder in response. I am doomed, I thought.

From the garden, grandma came running and shouting something in Vietnamese. My grandma stepped in front of me. Motionless as a mountain, she stared at grandpa. Silence flooded the room. Then grandpa looked sideways, sighed loudly and moved away. Before he left, he turned, pointing the stick at her and said, “You spoil him!”

I looked up at grandma and started crying again.

Everyone moves closer to grandma as her breathing becomes unstable. She now struggles with every breath. Once her lungs are full, she exhales as if she is saying, “I’m tired. I can’t go on.” Now, the grievers moan louder as if wishing they could somehow share her suffering. Hopelessly, I watch as life leaks out of grandma. I almost shed tears, but not from the event before me. It is an event from seven years ago.

I quietly unlocked the door. I pushed my motorbike through the threshold and parked it in its place. I was glad about our newly renovated floor. My dad replaced the old and damped wooden planks with concrete. Now, I could be as sneaky as a very drunk teenager can be. And when asked, I would tell grandma that I came home just a few minutes past midnight. My friend’s birthday party had been great and exhausting.

A few hours later, I woke up remembering that I had to see a friend who was leaving for the United States. Within fifteen minutes, I was dressed and ready to ride off to the airport. On the way out, I heard grandma saying something, but the noise of my motorbike swallowed it. I assumed that she had just reminded me to be safe and stay out of trouble, as she usually did, so I shouted, “OK!”

My teenage years were always fun and unpredictable. We extended the morning at the airport into an afternoon party. Then, we all cheered when someone suggested that we should expand this into Sunday night clubbing. It was supposed to be illegal for teens under eighteen to enter night clubs; but the situation then had become somewhat tolerated. I ended up getting home at dawn again. It was only an hour earlier this time. And, as usual, I would tell grandma that I was home a few minutes past midnight.

On a weekend a few weeks later, my dad and I were alone in our shop. My parents were merchants. My dad sold electronic goods, and my mom sold garments. When Laos opened its market to China, cheap goods started to come in, and the Lao economy boomed. Laotians spent more money as goods became more affordable. My dad, a Chinese-Vietnamese descendant, took advantage of the opportunity and forged direct chains of supplies with Chinese merchants. Our living standards were raised dramatically.

“Grandma complained about you,” he said, breaking the quiet around us.

I said nothing. It was better not to say anything because I had violated a lot of house rules. I did not know which one he was referring to, so I decided to wait for more information.

“She said you came home very late on weekends. Sometimes at dawn.”

I felt sweat running down my back.

“She said that I should move you back to your old room on the third floor,” he said, referring to the flat my parents moved to after their marriage. I used to stay with them and endure their stricter rules. I did not want to go back there.

“Then, no one would stay with grandma,” I suggested.

“Your sister might do a better job. She doesn’t like going out,” he replied. “You knew why I allowed you to stay with grandma.”

I nodded. My job was to take care of grandma after grandpa passed away.

“And what if something happened to her when you are not there?”

I felt my back soaked. My head spun with a million thoughts.

“Anyway, let’s have lunch; and we can talk more about it once your mom and sister return,” he said, reaching into the lunch bag. Sometimes, my grandma prepared lunch for us. She believed that fast food in the market was unclean and unhealthy.

“She made stir-fried crab curry for you,” he said as he placed the blue-lid plastic container onto the low table. Shortly after, two boxes of rice followed.

I was very excited. My grandma cooked my favourite dish for me.

“She told me to make sure that you have it, and you don’t run off again like last time when you told her to cook it for you,” he said. “She waited until two, but you did not return; and you ran off again the next morning. You promised her that you would come back for it. She had to throw it away because she’s too old to eat it. I think you know how expensive those crabs are.”

I paused for a moment, and then I said, “I will be right back. Nature calls.”

I ignored eye contact with everyone while walking to the public toilet. I walked faster as I could not block the memory about that promise. I had forgotten about it. I broke into a run as I realised it must have cost her a fortune and a lot of energy to prepare that dish for me. I would never be able to contemplate how much I had hurt her feelings. Yet, she acted as if nothing had happened.

I reached the toilet. I stood motionless behind the locked door. And amidst the silence of the place, I imagined how cold and tired she would have been sitting there until two.
*

I find myself back in the room when my sister asked me to get a glass of warm water for grandma. I rush out and come back with a half empty glass. Everyone gives way. I zigzag my way to her left side. I then shove my right hand under the pillow and I lift her upper body. I am no stranger to this practice. In fact, I have been her night shift carer since the beginning until the very end. I watch her as she takes in water little by little. Then a thought comes to me.

The incident happened four months ago when grandma fell in the bathroom. After that her health declined. Within a week, she could not move by herself. We had to do every human routine for her. A nurse supported her by day. My dad visited her at dawn, and he showered her in the evening. I cared for her at night.

My bond with my dad was not as friendly as it used to be. I turned into a rebellious eldest child full of impassivity and disobedience. I did not blame him for what we had become. I could not blame him, really. I understood how stressed he was from taking care of his mother and running a business that was now struggling.

In my dad’s view, the lack of his early discipline had turned me into a couch potato that would not do anything except attend classes three hours daily, sleep by day and play video games at night. I had turned into something that he had not hoped for. 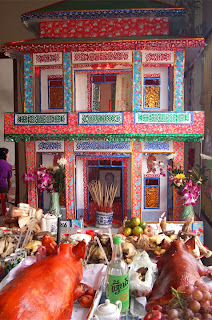 To be honest, I did not care what he thought of me. I continued my existence as best I could. I could not risk falling asleep - once, I woke up to find grandma lying cold on the marble floor again. The sight of her voicelessly groaning was the last thing I ever wanted to endure.
A week later, I asked her why she did not press the alarm when she wanted to use the toilet. She said she would prefer me to have a sound sleep so that I could perform better at college. I shook my head and smiled. We then made a deal that she would press the alarm if she needed me, and I would wake up only if she called. She also made me promise that I would not tell my dad about her falling.
Except the falling part, none of us kept our promises. I caught her time and again attempting to get up by herself. And, every time I caught her, she would grumble that I should be in bed. I just smiled and carried her to the toilet. And we repeated our broken promises several times each night ever since.
*
As I walk back to wash the glass, I hear frantic cries. It takes me a while to realise that grandma has passed away. I lean onto the kitchen wall, thinking how my life will be like from now on. How different it will be without her to return home to. I feel warmth in my eyes. I let out a long sigh. And in that brief moment I hear a faint memory echoes, “a good boy mustn’t cry.” 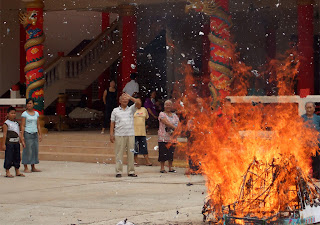