I had intended to write a long post about Wilfred Thesiger's Arabian Sands (1959), but on more than one occasion he demonstrates that brevity is often the best form of description. For example,

I crossed the border into French Somaliland and stayed with Capitaine Bernard in the fort which he commanded at Dikil. He and most of his men were to die a few months later when they were ambushed by a raiding force from Aussa. From Dikil I travelled across the lava desert to Tajura on the coast. So far it had been the tribes that had threatened us, now it was the land itself. It was without life or vegetation, a chaos of twisted riven rock, the debris of successive cataclysms, spewed forth molten to scald the surface of the earth. This dead landscape seemed to presage the final desolation of a dead world. For twelve days we struggled over the sharp rocks, across mountains, through gorges, past craters. We skirted the Assal basin four hundred feet below sea-level. The blue-black waters of the lake were surrounded by a great plain of salt, while and level as an icefield, from which the mountains rose in crowded tiers, the lava on their slopes black and rusty red. We were lucky. Some rain had fallen recently and filled the water-holes, but fourteen of my eighteen camels died of starvation before we reached Tajura.

There's enough material in this paragraph for at least a chapter: the visit to the doomed fort, Tajura and the coast, threats by local tribes, the dead world of the Assal basin, starvation. But poor Capitaine Bernard and the fourteen camels are merely brackets of a paragraph that leaves its victims behind and swirls deeper and deeper into the landscape.

It produces a striking, desert effect: the remorseless brevity that witnesses the most terrible parts of a difficult journey. 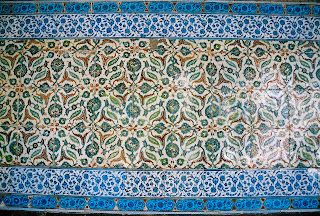