From this bookshelf to the world outside

I take the title of this post from Italo Calvino's essay "Hermit in Paris", an exploration of the relationship between place and how one writes. Calvino goes from the younger man for whom "the world was there just outside the door, packed with signs, accompanying me everywhere" to a writer who only works well in a space which is entirely his, his own room "with books to hand":

Maybe it is not so much for the books themselves, but for a kind of interior space they form, as though I identified myself with my ideal library.

The world is no longer something he carries around with him, but a place he consults, and "the leap from this bookshelf to the world outside is not as great as it seems": Paris is in fact "a giant reference work, a city which you can consult like an encyclopaedia", the best illustration of which is the shops, "the most open, communicative discourse a city uses to express itself". Consquently, "in Paris you can always hope to find what you had thought lost".

"Hermit in Paris" is derived from an interview, a source that may help to explain the high energy and economical manner of some of the thoughts that are collated here around ideas of place and imagination:

Maybe to write about Paris I ought to leave, to distance myself from it, if it is true that all writing starts from a lack or an absence. Or else be more inside it, but for that I would need to have lived there from when I was young, if it is true that it is the first years of our existence, not the places of our maturity, that shape the world of our imagination. Or rather: a place has to become an inner landscape for the imagination to start to inhabit that place, to turn it into theatre.

...Paris could become again an inner city, and I could write about it. It would no longer be the city about which everything has already been said, but just the city in which I happen to live, a city without a name.

But perhaps I do not have the talent to establish personal relations with places, I always stay half in the clouds, with just one foot in the city.


In fact, Calvino thinks the ideal condition for a writer is "close to anonymity", adding that "the more the author's figure invades the field, the more the world he portrays empties". As Calvino himself acknowledges, for most authors that is no longer an option: publishing deals are premised on visible authorship; and, after all, the essay containing these views is the outcome of a TV interview. But perhaps Paris remains a city where the author consults more and presents himself less. It's still a writer's city, promising anonymity, shops, and layer upon layer of references. 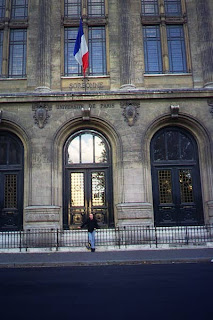 The essay is available in: Italo Calvino, Hermit in Paris (Vintage International, 2003).