The city has turned into an amusement park, or perhaps it always was. I’ve been stalking the remains of the Sutro Baths, as I walk these Land’s End sea cliffs trails. But now you can rent a two person, side by side, yellow scooter pod with an electronic guidance system that will tell you when to turn right and all about the sixties.

Is this place all about the money? What about Silver Barron Sutro, underwriting a civic train, cutting the line into the cliffs, so people could see his grand house and have public baths – grandiose for the people.

The wind is howling east with the four o’clock fog, pushing over the rock grabbing cypress for centuries, and the city seems just out of reach, overshadowed by nature’s wonder. I can see the yellow of Angel Island, the red of the G.G. Bridge, and the Marion green of the fogged over pacific pallet before me. The city seems to hide in the hills behind, full of magazine cream, and top popping key punchers. From this vantage, I can see a lot of the surrounding area - the urban takes over the vast bay’s shores and hills. How many stops to segregated San Francisco from the Black East Bay? No cheap transport to the insular peninsula.

San Francisco, stuff of myth and lore, carved out of an image of a Saint who talked to animals, the underground and overground interface, and the over scroll marketplace. Is there a universal over-soul besides the internet?

We don’t make anything. I am looking for a job as a writer.

There is a loud drunk guy talking. It’s afternoon and the whole bar is painted black. The bartendress is a punk rock girl better than Joan Jett.

The drunk’s talking her ear off, and the rest of us. “That was the climax of my fucking story --!” the drunk says, “A Toast!”

“Are you happy?” the drunk says. He’s kind of a bald blond yuppie. “Are You happy?”

The punkers murmur. I’m sitting at a table by the window, not at the bar, so I don’t have to answer.

“I don’t have a job,” says the drunk. “But yeah, I’m telling you, I have an idea…I had it all. I had it all set up, because I speak French and I used to be employed. I’ve been sitting around Smoking Pot! – watching French movies because I speak French but I forgot a word!…Intellectual Property! Year of the Fucking Tiger! Kick some fucking ass! But basically I’d be licensing intellectual property to a market five times as big… but here’s to clean sperm and no condoms and my heavily employed wife, a Chinese sector narcissistic explosion – so here’s to making babies.”

The Wu-Tang Clan is on the jukebox, simple piano and the cut-count rhythm of the ODB. The drunk starts up again: “Here’s what I’m trying to tell you…”

The jukebox changes to Johnny Cash, and the drunk sings along to the guitar solo. The drunk’s tolerant new bar mates scatter. He starts flirting with the bartendress. There are professional borders on the TV with the sound down, another corner screen with the original Bad Lieutenant, sound down plus subtitles. There is also a red felt pool table near the back. The drunk mumbles, “Marriage…ha ha ha. When do you say yes – when do you say yes to That?”

There used to be peanut shells on the floor in here, and black plastic baskets of peanuts on the bar – and before that, you could smoke in here and the pool felt was purple. But it is 2010 now, nobody knows me in here anymore and it’s afternoon.

My wife and child arrive tomorrow. I thought I might have a job by now.

… and one abandoned railroad line.
The cement of the sidewalk is stamped with the mark: WPA 1940

And surrounded by the sparkle of broken glass, and white dog faeces,
there is a yellow
plastic package of black meat on the sidewalk.

It seems to have been cooking there for years.
A criminologist would be able to tell better.

The plastic wrap has burst into strips and mini-flags,
but the yellow polystyrene tray remains intact.

What used to be the meat, looks like melted dung or mud (which perhaps
it is).
Gently quivering in the breeze, the tentacles of clear plastic seem to
beckon, advertising.

The longer you look the more you want to gag – though it is hard to tell
the smell from all
the others, and it’s nothing you’d notice from a car.

There was a dead dog in a plastic box, and that got picked up after a
phone call and a
couple days. But the old yellow Styrofoam remains, even after the recent
rains.

And a small puddle of rainwater has sort of eroded a crater,
leaving a small pool of meat tea. 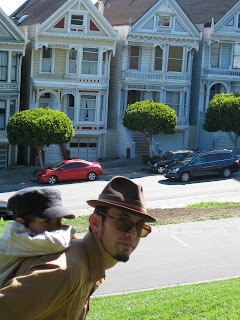