The first day of summer

Summer has confirmed its arrival with a sudden wall of morning humidity. By the time it arrives each year, I've somehow forgotten it will be coming. It's a cloak around your skin, impossible to take off, even when you go inside. It releases the smells of summer: tarmac, wet grass, the mulch that is always heavy from afternoon storms, clay under the rocks, the heady stickiness of the pollens, wood that is beginning to bend. In the early evenings, it stops: the humidity becomes a kind of lazy heat that can't quite be bothered leaving. And then, when the sun sets at around seven, it begins again: both nocturnal and a creature at home in the blinding mornings.
Enter, the internet.
My sister Frída is commenting (via Facebook) on pictures I took last February in Iceland. She says she's only just seen them - they must have come up on that new Facebook application that shows you people's old photos. Right now, I can't imagine what it's like to be that cold, but posting some pictures from the day feels like putting an ice bucket in front of the fan. 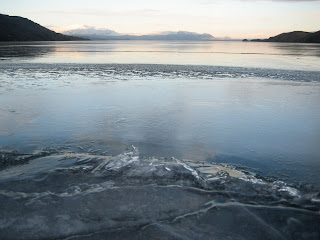 The ice had frozen about twenty metres out into the lake, Thingvallavatn, 40 minutes' drive from Reykjavík. 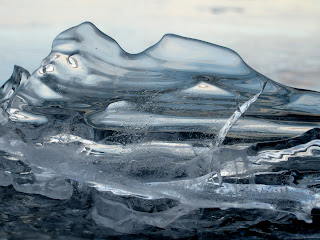 I'm not sure how the water had frozen in this way, but it seemed as though each stage of the freezing process was documented in the layers and shadows of the ice. 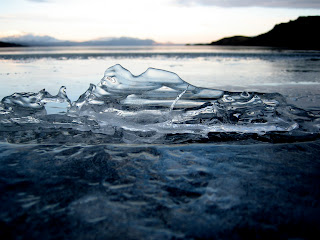 My friend and I photographed the lake for about half an hour. I was only using a little Canon Ixus, but it took the most gorgeous photographs of the slow winter sunset being refracted in the surface ice and in the waves that had formed at the edge of the lake. 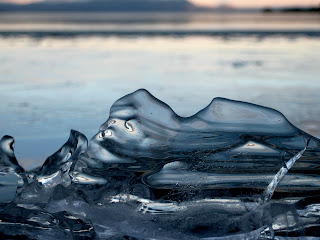 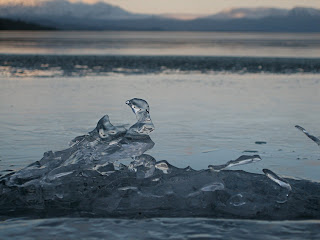 In this last one, the light is not as distinct and sharp as in the others, but I love the way the ice seems to be reaching for the mountains in the far distance, almost like an army flag bearer.


(A piece that I wrote about this trip for M/C Journal can be found here.)