Letter from Yamunotri, by Jan Burnett

I will probably regret going all the way to Janki Chatti and not walking the final five kilometres to Yamunotri.
The journey from Uttarkashi to Hanuman Chatti is supposed to take six hours but it took us over nine. Blasting for road widening at the start of the Yamunotri Road had loosened the mountainside. These landslides weren’t the first we encountered and were not to be our last. Roadworks around Barkot combined with the monsoon had turned the road into a slippery bog of deep potholes and ruts which cost one taxi its front axle.
We weaved our way along the relentlessly winding road up and down the Himalayan Mountains to the Yamuna Valley. It has been a particularly wet monsoon so everywhere is green in shades ranging from olive through to deep dark hues and the almost fluorescent green of the rice fields. We rose to 2100 metres above sea level, back down to 1000 metres and then back up again. I saw people walking on grassy, almost vertical slopes and wondered how they maintained their grip on the mountain.
Babalu drove. I had met Babalu last year and we hired him and his Mahindra jeep to take us from Uttarkashi in the Bhagirati Valley over to Janki Chatti in the Yamuna Valley in the western Indian Himalaya. The total trip was only about 150 kilometres each way, but in these mountains that is a long journey with average speeds of only 20 to 30 kilometres per hour on the steep winding roads.
Paul, my husband, sat in the front and Debendra; Balvil and I sat in the back. Debendra and Balvil are from Nolunna, where we are staying. Nolunna is a Hindi school and guest house about 20 kilometres upstream from Uttarkashi, on the banks of the Bhagirati River (as the Ganges is known before she meets the plains). Balvil, at 17, had never been beyond Uttarkashi and neither he nor Debendra (a young married father of three) had been to Yamunotri. This was to be a big experience for them both. 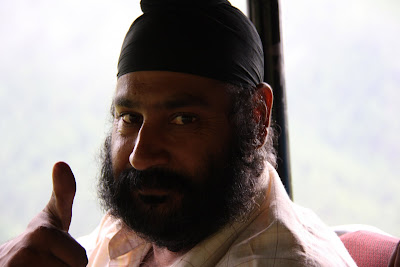 Babalu
Babalu, as ever, was effervescent and we chatted, laughed and listened to Hindi music. Babalu’s English was worse than my Hindi, but we communicated well. Everyone is Babalu’s friend: he is a likeable larrikin. At the first road block he directed traffic on the lower Rishikesh Road so no-one was inadvertently crushed by debris dislodged by the front end loader clearing the landslide. We lunched late at a settlement further up in the valley. “My friend”. “Chai besht (best)”. And he told all the waiting cars the road was now open.

But when we got upstream from Syana Chatti, Babalu’s face was set like stone as he concentrated on the road badly damaged by landslides. Once through the more difficult sections, he would lighten the atmosphere by saying, “Road good, no damage”. We had just passed a section not much wider than the jeep with a 100 metre sheer drop to the Yamuna River on one side and an unstable wall of rock on our other when Babalu came to a stop. He turned, “Road blocked”. I responded, “Vapas”. “Vapas?” “Yes”, I said. And with that we negotiated a three-point turn on the side of the mountain and headed back to Hanuman Chatti.

After nine hours we were stymied only a few kilometres from our destination. Babalu’s frustration was palpable. “Only one kilometre more”. But there was simply no getting through the slide that had already claimed one victim: a Mahindra Maxx sat in the middle of the road, buried to its chassis.

It was almost dark when we inspected the room at the “Panwar Tourist House and Restorent” at Hanuman Chatti. It was a typical Indian style hotel. The room consisted of a large bed, big enough for three (or more) with a thin mattress, three pillows and three heavy thick doonas. The ensuite was a room with a tap and bucket for bathing and a squat toilet. It was relatively clean. There was a light and power point, but no electricity. My request for “garam pani” (hot water) was granted within minutes. 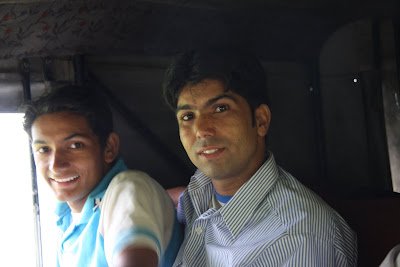 Babalu, Debendra and Balvil took the adjacent room. Babalu turned out to be something of a wheeler and dealer and we secured both rooms for 300 Rupees (about AU$7.50). We dined downstairs in the ‘hotel’, a large open room with the kitchen the main feature. The kitchen was a mud platform with a wood-fired oven built into it and the cooks squatted on top, rolling and cooking chapattis over the fire, dhal in the pressure cooker, and chai in a pot. Everything was at their fingertips and what they couldn’t reach was passed to them by an assistant who also served our meals.

The next morning dawned shrouded in the Himalayan monsoon rain. My initial thoughts turned to Nolunna, but as the rain began to clear we loaded into the jeep and headed for the landslide that had halted our progress the day before. From there we were on our own. We didn’t make it that far. Only a kilometre from Hanuman Chatti the road was blocked by another slide, so we headed to Janki Chatti on foot.

We were only at just over 2000 metres and the climb was steady, but Paul and I both felt our breathing labouring as we crossed landslides, walked on road that was itself a torrent and climbed a steep shortcut that had me mildly panicked about how I would get down again. Finally, just above the GMVN Rest House at Snol Gaad we had to run across a large landslide where intermittent showers of rubble teased of further collapse. We were now about four kilometres down from Janki Chatti and the road above was ‘open’, so we piled into a share taxi.

In the mountains the taxis tend to be soft top Mahindra jeeps or hard top Mahindra Maxx’s. The Maxx is about the size of a mid-sized four wheel drive. There were five of us over the back, four each in the front and rear seats, one on the roof and two clinging to the back. It was ridiculous on many fronts and, on that short ride, Paul and I decided we would give Yamunotri a miss and walk back down to Hanuman Chatti after exploring Janki Chatti.

But for Debendra and Balvil, Yamunotri was their destination. Being the first of the Char Dham, Yamunotri is a significant religious site and the source of the Yamuna River. The Char Dham is collectively the four sacred sites that represent the spiritual source of the Ganges. Few Hindus would pass up the opportunity of this pilgrimage.

So after chai Debendra and Balvil headed up the steep five kilometre path to Yamunotri, while Paul and I explored Janki Chatti before commencing a leisurely descent to Hanuman Chatti. The day was bright and warm and the walk was pleasant. Even the big landslide at Snol Gaad seemed to have settled down, though we kept up a brisk pace passing through it. After chai at the GMVN we embarked on the final five kilometres. Just a kilometre from Hanuman Chatti we stopped on a high switchback to watch some land slipping. It was an impressive sight. It wasn’t until we rounded the bend after the next switchback that we realised the land had been falling directly in our path. 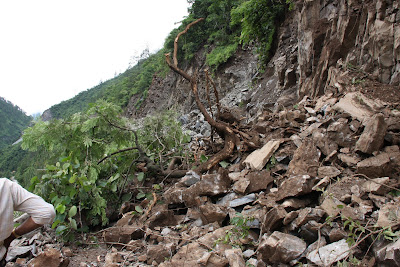 We sat, watched and contemplated our next move. How long should we wait? Water was flowing down the slide and every now and then a small rock would dislodge at the top and as it gained momentum on the way down it would dislodge further debris until a shower of rock and mud cascaded down the mountain. The main slide appeared to be over and the road was blocked by trees and boulders.

Elderly Indians, more accustomed to this than we were, negotiated the slide, gripping a large boulder as they stepped around the outside on a six inch ledge that had been created by the falling earth. There was nothing between them and the raging Yamuna 100 metres below. I wasn’t keen on that route, and told Paul I wanted to investigate closer. His response angered me so much that, with my gut filled with fury and adrenalin, I took the Indians’ route around the slide without breaking pace.

We were back at Hanuman Chatti less than two hours, when Debendra and Balvil returned from their pilgrimage. “Yamunotri bahut sundar hai, lekin rasta...” (Yamunotri is very beautiful, but the road...). He clutched his calf muscles in a way that made me feel better about backing out of our planned walk to Yamunotri. Debendra and Balvil are fit young men and they felt the strain, albeit after running parts of the way in their excitement. 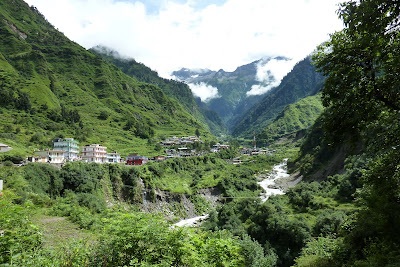 Debendra presented Paul and I with souvenir pictures of Yamunotri. It brought tears to my eyes and I thanked him by touching the gift to my forehead. Then he excitedly showed us, in the pictures, the hot springs next to the temple: he had bathed in them.