Hammarskjöld was raised in this ordered and lively, small-scale world. It is a town that must have fortified him later, when he was immersed in whole-of-world affairs, and when his job was to bring order and fresh, sane eyes – through organizational charts and diplomacy – to international conflicts. 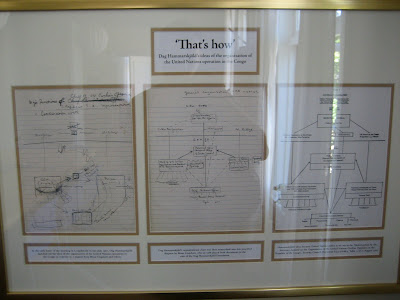 Hammarskjöld's organization sketch for the UN presence in Congo (left), alongside Brian Urquhart's transcription (centre) and the clean copy (right)
*

As a boy, he walked from the Castle – his father Hjalmar’s residence as Governor – along what is now Dag Hammarskjöld väg to Katedralskolan, a State Gymnasium that, like so many public buildings here, presents a wide, classical façade of pale walls and tall, dark-framed windows. Beneath his home on Castle Hill were the Cathedral, the University and famous Carolina Rediviva Library, and a grid of slim streets of apartments and university offices that occupied the flats along the shallow Fyrisån river, at the end of almost every street forded by a pedestrian bridge, as though the town resists the channelling of traffic, and insists on parallels.
That was his start, every morning and into adulthood: a sane and becalmed community layered over a regal Viking past (the mounds of Gamla Uppsala are only ten minutes’ bike ride away) and the measured, methodological radicalism of intellectual life. The other great Uppsala modern is Carl von Liné, a hero of Hammarskjöld’s and the seventeenth-century founder of botanical taxonomy, the genus-species system that we all learn at school. And that, really, is Uppsala all over: there is no need to tame nature if you can adequately describe it. Systems don’t necessarily limit creativity and freedom; sometimes, systems free us up.
At the cemetery where Hammarkjöld is buried, you find him framed by another of the systems that, at best, enables rather than restricts: the family plot, guarded over by Hjalmar’s great, rough-edged headstone – Dag’s father was Prime Minister of Sweden before becoming Governor here – is a reminder not only of Dag’s self-made position in Sweden, but that he attained that position in part because of privilege. Diplomacy, after all, is a noble art. And, again, you find yourself inverting your basic views, in this case the view that privilege is always wrong, because in Hammarskjöld’s case it provided the basis of sophistication and calm in the face of the great pressures that came later.

I haven’t travelled widely in Sweden, but despite its wealth, I doubt that even Sweden is everywhere as prosperous and handsome as Uppsala. Locals joke that it is the city of eternal youth, and this holds true even in summer, when the students are back home. I had to buy myself a new shirt today, and my shop assistant, a local and a student at the University, said the town was much busier in winter. I asked her what she knew about Hammarskjöld. “We learnt about him when I was – oh, I don’t know – ten maybe. But to be honest, when I hear the name Hammarskjöld I think of the main road. That’s terrible really, isn’t it?”


Well, at least it’s a long, straight road that leads to a marina and a small, pebble beach on Lake Mälaren, where on a hot day I find a dozen or so families with small barbecues and fold-out chairs. Across the lake to the south is Stockholm, where Hammarskjöld joined public life after his years in Uppsala. The water in the lake is brown, but when you're in it almost the colour of a deep Shiraz wine, and much warmer than you expect this far north. Girls with flushed cheeks and their pale fathers bob in the deeper water, while I hop back onto the pontoon to find my bag and a drink.
There are no tourists at the lake, and few in the town, either – at Uppsala Castle, the twice-daily tour won’t start unless we have at least three takers, and that in the end is all we get. “Are you not part of the bus tour route?” I ask. “Apparently not,” replies my guide, “and if you’re into castles, there are much bigger ones in Stockholm. That’s why we have to wait until we get three customers before we do the tour – it’s too expensive to run for only one or two.”
But what about Hammarskjöld? No, she hadn’t even heard of him before she came to work in the Castle. Another confirmation that he is being forgotten, and that his quiet style, however much it achieved during his period as Secretary-General, has slipped beyond the flow of more recent currents.

In the Castle basement, the Peace Museum commemorates his career with a few of his personal items – school exercise books, his pipe, photographs he took during his mountaineering – and with a timeline of his career at the UN. I startled the two young assistants by asking to buy half a dozen books. “Yes, yes, of course,” said one, totting up the amounts on her mobile phone while the young man by her side searched for the “böcker” button on the cash register. When I asked to pay by credit card, the poor things became quite panicked, and the unearthing of Swedish notes began.


I asked again about Hammarskjöld’s place in the cultural memory when I visited the Foundation named in his honour. Mie-Na Srien, an intern from Seattle, told me that she’d quit her accounting job at KPMG because of Markings – it had affected her in something like the way it did me twenty ago. But this kind of immediate influence seems rare these days. Dorrit Alopaeus Ståhl, Senior Coordinator at the Foundation, said that few Swedes of my generation would know who Hammarkjöld was, even here in Uppsala. “But isn’t he thought of as the Kennedy of Sweden?” I asked. “Yes, he was,” replied Dorrit.
I was seated in the airy, book-lined reception room. Outside, the bright Swedish sky was blue enough for even an Australian, and a breeze found its way through translucent, IKEA curtains. While we spoke Dorrit collected pamphlets and articles about Hammarskjöld. “Have you read this one?” she would ask. “No, not yet.” Pause. “Well, I’ll add it to your pile, then.” I felt like I was calling in on someone in an Austen novel: seemingly, there would always be someone ready waiting in the drawing room. Their sympathy for Hammarskjöld was immediate, almost spiritual.
Dorrit and Mie-Na offered to show me the seminar room upstairs. “Something magical happens when people gather here,” she said, as we entered. “Suddenly, everyone talks.” It was a well-practiced line, but I had no trouble believing it. Uppsala. An orderly, energetic room, furnished barely in that northern, Lutheran way with timber chairs and tables, a side table with a tablecloth of pamphlets, and again those tall windows with skirts of white, breezy linen.
But the highlight for me was in the next room along, where there hung a portrait of Hammarskjöld. “This was the first portrait Bo did of Hammarskjöld,” said Dorrit, “in preparation for the main one. They have that one in the UN in New York. But we think this one is better. It catches the liveliness in his eyes. Sometimes he could look so sombre.” “It’s wonderful,” I replied, “quite playful.” The three of us pondered the portrait a little longer, and then Dorrit said, “I will take a picture of you with it.”
Tomorrow I fly to Iceland, and leave a town that has affected me like none I can think of since I first saw Florence. Like that moment twenty years ago, when I look at this place I feel like I’m looking at a living portrait, an exquisite study: the preparatory sketch for a final version I don’t ever expect to see. 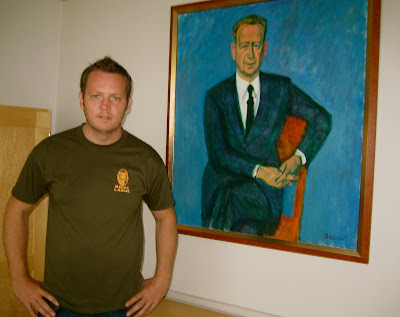 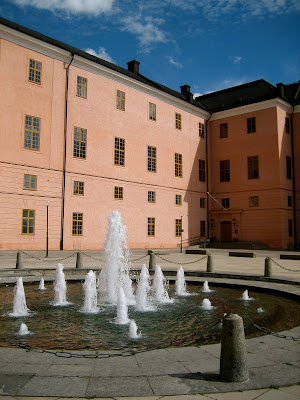 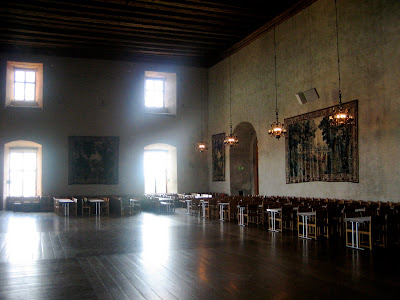 The banquet hall, where Hammarskjöld would play tennis 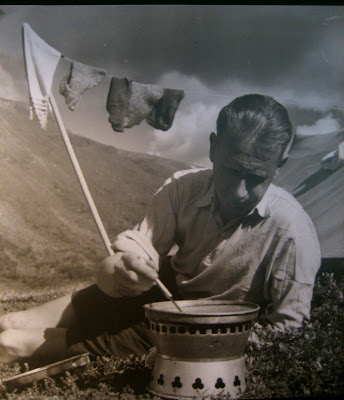 A photograph of Hammarskjöld exhibited in the Peace Museum 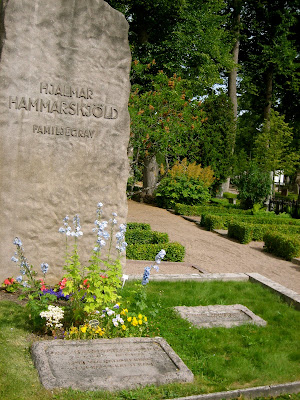 The imposing Hjalmar Hammarskjöld headstone, with Dag beneath 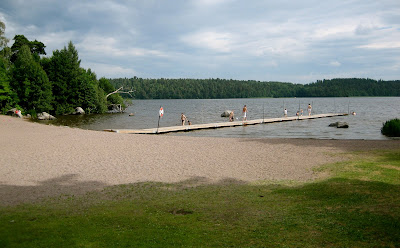 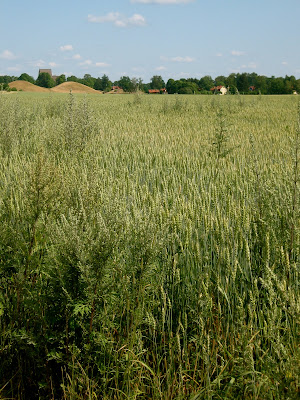 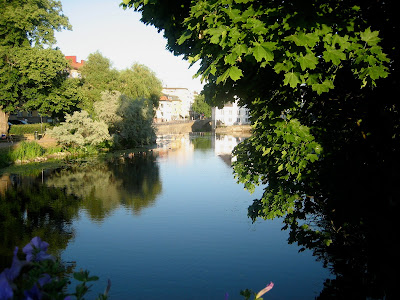 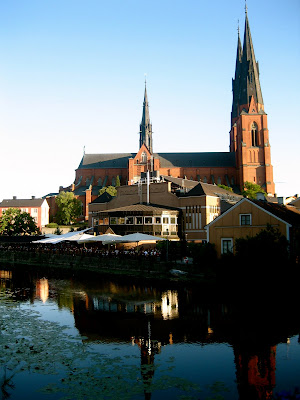 The cathedral, where Hammarskjöld's funeral was held (I am writing this post in the bar at the cathedral's feet)