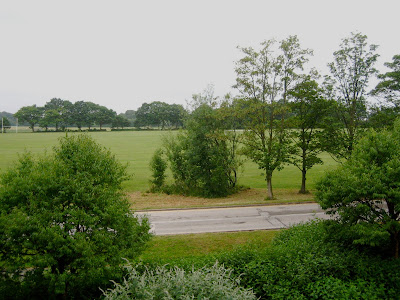 With travelling, my dreams are suddenly more leisurely. This morning I dream about a student - not one, I should add, that I've ever met - who has written a fitness book based on her own seven-day-a-week regime. “I began exercising this much to get along better with my brother,” she tells me. It is a poor work, though, and the student herself, I cruelly observe, is not a good advertisement for it. She puffs her cheeks and replies, “You should have seen me before.” I even have time to read her second book (self-published), an action thriller based entirely on her desire to have a political organization run by Mr Crape so that his followers can be called Crapears.

I wake at 4:30 to half-light and faint bird calls coming from across the football pitch next to me. I lie listening to the birds for a while, waiting for something, until I realise that I am subconsciously waiting for the kookaburras to join in. It’s just light enough to read without putting the light on. I’ve brought with me Lawrence Durrell’s Prospero’s Cell.