I am writing this on the train to Leeds, where I am presenting a paper at the International Medieval Congress, this year is on the theme of travel in the Middle Ages. As a boy, when I used to travel along this line to visit relatives in Doncaster, you knew you were in Yorkshire when you smelt coal. Those days are long past, and we whistle past a smokeless, green landscape.

This morning, I spent the last few hours of my flight listening to Bach concertos and watching the protracted dawn of the flight from east to west. The slow sunrise was at its most magnificent as we flew over Russia, but I also got a thrill when our flight path took us past Malmo and the southern Swedish coastline of Dag Hammarskjold's summer holidays. I glimpsed the beaches through a low cloud ridged like a glacier. The beach, the ocean, and the ice seemingly always co-present in Scandinavia, even in mid-summer.

The in-flight entertainment included a two-part travel programme by Kevin McLoud, the presenter of the British show Grand Designs - a favourite of mine (Slumming It, Channel 4). He transposed the format of the Grand Designs show onto experiences of the Mumbai slums, and Dharavi in particular - where he lived for a week - with mixed success.


In Grand Designs, McLeod usually holds out reservations about a build until the last few minutes of the show, when he generally comes around to the design, or at least tries to meet it half way. The opening (and supposedly flawed) premise of the Mumbai show was that architects (and Prince Charles) think that the slums in Dharavi have a sense of community now lost in the developed world. McLoud, as usual, began by expressing reservations. But while he did like aspects of the slums - indeed, the community feeling he had come to find - he never really managed to meet the English architectural community half-way; the dirt and hardships of the slums affected him too deeply. His horror at what he saw dominated his account, and so the programme became hostage to his disgust.


I hope I can be permitted a little boast, even after I have been harsh about Slumming It. Last week I won a Dean's teaching award for my work in my three Creative Writing subjects, a very satisfying moment for me after a big semester of teaching. Here I am accepting the award from the Dean, Sue Street, and the Assistant-Dean of teaching and learning for the Faculty, Christina Hong-Joe: 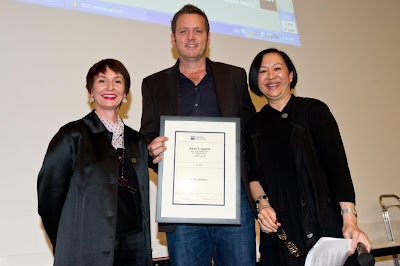