Strangers in a Strange Place

A few years ago, I wrote an essay on the topic of Icelanders abroad - specifically, Hjalti Skeggjason, who in the early years of the eleventh century travelled between Norway and Sweden in an attemt to resolve a territorial dispute between the two King Olafs. There is nothing in the source material, Snorri Surluson's Heimskringla, to suggest they were also fighting over the sole use of the name Olaf.

More recently, I became interested in the representation of Sweden in the family sagas, and found a recurring narrative pattern: episodes with Swedes normally also involve a threat to a household, and the vanquishing of the Swedish threat (by a person in search of a challenge) usually leads to the prize of marriage to the householder's daughter. In the family sagas, at least, being Swedish means being unhinged, a berserk, or a monster. Certainly, there is nothing in their medieval representation to foreshadow their reputation today for mild, sane, and democratic living.

Thus, the most famous Swede in the sagas in also the most monstrous, the ghastly Glámr in Grettis saga. He is a disgruntled shepherd working in the north of Iceland who becomes possessed by a vile spirit and then begins a killing spree. Grettir, who desires constant challenges, takes on the monster and wins, but is left with a terrible curse: before death, the monster prophecies that Grettir will live his life in exile, and be forever accompanied by a vision of the dead monster's eyes.

Exile makes Grettir an outsider (on this, see Janice Hawes' 2008 essay in Scandinavian Studies) but also a traveller: he is forced to seek refuge with allies and in the remoter parts of Iceland. For the outlaw, the highlands and the offshore islands offer some safety. We see the same thing happening in Gísla saga. And, in both sagas, the stature of the central character is enhanced by a long exile, as the reader's sympathy for the character are tied to the outlaw's journeys through Iceland.

What of other foreigners in medieval Iceland? Sverrir Jakobsson's 2007 essay on the topic ("Strangers in Icelandic Society 1100-1400") suggests that, at least until the fourteenth century, Iceland was a reasonably open community that allowed foreigners to settle and, if things went their way, to prosper. And, as Chris Callow points out, "In almost every Saga of Icelanders there is a reference to someone called austmaðr" ("Narrative, Contact, Conflict, Coexistence", p. 325), or "east man", then the standard Icelandic term for a Norwegian trader. They, in particular, seemed to enjoy real hospitality, perhaps aided by the fact that Norway was Iceland's "mother country" and that until the late Middle Ages the languages were extremely close, if not identical.

But is the saga author's lack of attention to cultural differences or possible difficulties faced by foreigners really an indication of acceptance by the local community? One might argue that locals often stuggle to notice the difficulties of migration and settling in, and so why not saga authors, too? And, if a foreigner isn't going to be the main focus of a story, but rather a narrative device (as is often the case in the sagas), would an author invest all that much time in developing their cultural characteristics, or for that matter other aspects of their character? The last thing an author needs during a tense fight scene is for the enemies to misunderstand each other. "Sorry, Leif, but did you say my word or my sword?"

Naturally, historians are keen to use the family sagas as evidence of medieval Icelandic attitudes to foreigners. But is there a way of doing so that not only acknowledges the literary nature of our sources, but factors that into our search for attitudes? Surely there must be some content embedded in the form of these representations? If foreigners appear as rather flat characters, can they still be read as being welcomed into the community? 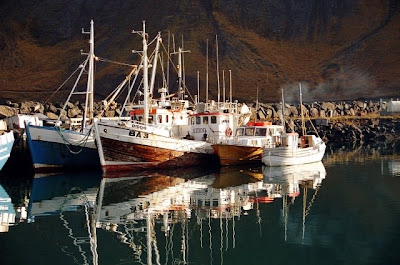