I suppose at least since Gulliver's Travels, the stumbling, innocent, lost traveller has been a major figure/trope of the genre. But in the nineteenth century, humour in travel writing most often seems directed at fellow travellers or the naive locals encountered by the more world-wise visitor - W H Auden, in the opening to his Letters from Iceland, collects a suite of these superior, if often very funny, insults. Here are some of them:
Iceland is real: ‘Iceland is not a myth; it is a solid portion of the earth’s surface.’-Pliny Miles.
Concerning the Vegetation: ‘Nowhere a single tree appears which might afford shelter to friendship and innocence.’-Van Troil.
Concerning the Capital: ‘Reykjavik is, unquestionably, the worst place in which to spend the winter in Iceland. The tone of society is the lowest that can well be imagined.’-Henderson.
The Icelanders are human: ‘They are not so robust and hardy that nothing can hurt them; for they are human beings and experience the sensations common to mankind.’-Horrebow.
Concerning their appearance: ‘The Icelanders are of a good, honest disposition, but they are at the same time so serious and sullen that I hardly remember to have seen any of them laugh.’-Van Troil.
Concerning their food: ‘It cannot afford any great pleasure to examine the manner in which the Icelanders prepare their food.’-Van Troil.
Concerning their habits: ‘If I attempted to describe some of their nauseous habits, I might fill volumes.’-Pfeiffer.
Concerning their kissing: ‘I have sometimes fancied, when they took their faces apart, that I could hear a slight clicking sound; but this might be imagination.’-Howell.
A Warning: ‘To be well received here it is necessary either to be rich or else to travel as a naturalist.’-Pfeiffer.
First sight of Iceland: ‘We were delighted at seeing some new faces, in spite of their nastiness and stench; and their grotesque appearance afforded us much amusement.’-Hooker.
Privations of a traveller: ‘As long as I remained in Iceland I was compelled to give up my German system of a diet.’-Pfeiffer.
Auden is of course distancing himself from earlier visitors, but he is also giving us an account of what it was once like to travel in Iceland, and underneath the insults that he has collected there gathers, by sheer force of numbers, a picture of pre-boom Iceland. Yes, it was a primitive place. Many of the locals did smell of cod liver oil, stale mud. Perhaps, as Howell tells us, they even made a clicking sound when their lips parted. Certainly, there are plenty of clicking sounds in Icelandic, so why not the kissing too? 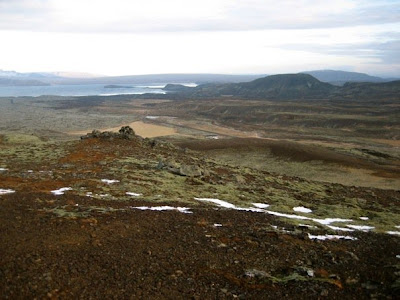 The best travel writers today direct much of the humour towards themselves, a superiority towards the self formerly (as Thomas Hobbes calls it) that certainly wasn't entirely absent in the nineteenth century. But more on that in the next post. Worth a visit: Letters from Iceland, by W H Auden (Faber, 1967).