An evening with Bob Ellis

The writers’ green room is empty but for three Festival workers and Bob, who sits at the side of a long table of water glasses and pamphlets and reads his new book, his diary of 2007-2008, called And So It Goes. I introduce myself, and he wants to get straight to it. How are we going to organize the session?
‘But your trip up?’ I ask.
‘Terrible. My emphasis is this. You’re a French tourist, and at Casino they make you get on a coach. You spend five hours on a bus between Casino and . You are not allowed to eat or drink.’
‘Do you want to talk about this is in the session?’
‘No. It’s irrelevant.’ He waves his hand dismissively. ‘C’mon, what’s the plan for this afternoon?'
‘I thought we could start with something about the diary form,’ I reply.
‘Mmm?’
‘You know, its “modally mixed nature,” as the literary scholars might say.’
‘Well, it’s about 20% shorter than it ought to be,’ explains Bob.
‘Its immediacy. And that you can include TV transcripts, excerpts from essays, family stories, and so on. Almost like travel writing - think of The Road to Oxiana.’
He smiles. ‘Oh, yes. I know. This is a better way of thinking about it, a travel journal rather than a diary.’
‘Anyway, after that I thought you could read from the book.’
‘Funny or serious?’
‘Funny, I think. The audience will get serious, don’t you think, during questions and answers.’
‘Yes. I’ve marked some pages.’
Bob alters posture, raises his book a little, and reads to me. He’s chosen well, the best of the diary, full of his anger, his provocative voice, his despondency, his bitter wit.

An hour later, we have a plan for the session: 1) the diary form, 2) readings, topics: 3) Rudd and Gillard, 4) Turnbull, 5) Obama and Pearson, 6) travel and globalization, 7) cricket, 8) death. The ushers take us down to SLQ Auditorium 2, where there is a long line waiting. I hear one or two couples tell each other, ‘Here he is.’ The auditorium is more precisely a small lecture theatre, and Bob is irritated by the size. Probably, some will have to be turned away. But it’s an intimate theatre, and suits the session. Bob settles heavily into his seat, and moves the microphone close to his face.
Bob turns to me. ‘Can you see anyone under 40?’ he asks.
‘I’m under 40.’
‘Yes, but you have to be here.’
‘What about her?’ I point to the back of the auditorium, where a young, blond woman enters.
‘That’s my publicist.’
There is a cue to begin from the theatre manager.
‘Welcome everyone to this session with Bob,’ I say. ‘The title given is “Bob Ellis Goes On.” There is warm laughter. This will be Bob’s crowd. ‘Not,’ I add, ‘Bob Ellis Goes On and On and On.’ I throw a little glance Bob’s way, but he’s smiling, too.
‘Just watch me,’ he replies, or words to that effect.
It is very smooth, perhaps a little too smooth. We run to time, and I worry that we may seem a little too rehearsed. But Bob has added comments about , and female politicians, perhaps to guard against boredom, perhaps just because he likes to comfort and offend at the same time. Icelanders get a mention, too, or more specifically this Icelander-something about fishermen. And for the rest of the evening, he calls me ‘the fisherman over there.’
At the end, I add my own last question: ‘We know that you go on. But what keeps you going?’
‘Debt,’ he says. ‘I owe $460,000. Why else would I be writing two books a year?’
‘I see.’
‘No. I’m joking. Or half-joking. I write for new ideas. That’s why I come to festivals. The rush of new ideas.’

The publicist comes down. Bob is to sign books now. ‘C’mon, digger,’ he says. ‘Walk with me a bit.’
There is no-one at the desk, no other authors, that is. But half a dozen of the audience linger around the book stalls, choosing between his diary and the book that will be released in October, The Capitalism Delusion. I stand by the table.
‘Sit down. Sit down,’ insists Bob. ‘Come and talk to me.’
The publicist is sent away to find wine, while for fifteen minutes Bob signs. The publicist comes back with fizzy lime juice. I see my friend Sarah. She is meeting an editor, Whitney, whom she knew from school in the States and bumped into at the Festival. Sam, another colleague, has also arrived. He has to be at the Sly Fox for the start of the Fringe Festival at eight o’clock.
‘Would you like to join us for a drink?’ I ask Bob.
‘Yes. Yes. But where?’
‘There should be somewhere nearby.’
‘Don’t say “nearby.” Just tell me where it is.’
I turn to the others for support. ‘Whereabouts is the Sly Fox again?’
‘Just down here,’ says Sam, pointing along .
‘Don’t say “just down here”,’ replies Bob angrily. ‘I don’t know what “just down here” means.’
I don’t know what sort of directions he wants. I say that in about a hundred metres along this street we will get to a corner, about thirty metres to the right of which is the Sly Fox.
‘Don’t draw me a fucking map,’ says Bob. ‘Just tell me where it is!’
‘Do you mean point to it?’
‘Yes. Point at it.’


‘What will you have?’ I ask. We are, thankfully, arrived at the Sly Fox. It is about 6:30pm.
‘A large Heineken,’ replies Bob.
Sam buys drinks for Sarah and Whitney, and shortly after excuses himself. He wants to get ready for the Fringe upstairs.
‘How was your session?’ asks Whitney, the American editor.
‘Very good,’ replies Bob. ‘I was very, very good.’
‘Bob,’ I say, ‘this would be a great time to say what you thought of my performance.’
‘Oh, yes, brilliant. Especially for a fisherman from the .’
‘Thank you, Bob.’
‘This is my new book.’ He hands Whitney a copy of The Capitalism Delusion. ‘Can you get it reviewed for me in ?’
‘Oh.’ She takes the book. ‘Let me see.’
‘Show her the chapter on ,’ I say.
‘I can’t believe you’re from ,’ replies Bob, looking at Whitney. He folds open the book at the chapter called ‘A Faraway Country’, which I had noticed earlier began with a reference to David Oddsson, the head of the Icelandic Reserve Bank. ‘Take it with you,’ he tells Whitney.
Somehow, we get onto Evelyn Waugh. I mention the famous snobbery scene where Ryder makes fun of Rex and his American taste in food.
‘I always carry Waugh with me,’ he says, and out of the depths of his black overnight bag comes Brideshead Revisited. ‘Let me find it.’ He is looking, I think, for the restaurant scene, but when he starts reading it is from Ryder’s first description of Rex.


None of us has experienced this before, this mix: alcohol, bawdy opinions, and reading out loud from Waugh. But it’s good. So far. Bob is a time capsule, perhaps a glimpse of a very talented generation and how they might have been in the late 1950s and early 1960s. I ask him why, after university, he didn’t leave . ‘I was booked to go on the same boat as Clive James. I ran out of money.’
He goes on, listing the others who were at at the time, most of whom have succeeded abroad: Germaine Greer, Robert Hughes, and so on. He speaks with a light acknowledgment of a criticism that I hadn’t really intended, that making it in in the 1960s and 1970s wasn't quite the same as getting ahead in and .
Then, Brooklyn, Robert Hughes, leaving , art criticism, Heath Ledger and jet lag, Robert Hughes and jet lag, and back to .
‘Sex in the City,’ he tells Whitney and Sarah, ‘is one of the best shows ever made. And the movie is quite brilliant. Perfectly made romantic comedy.’
Then, Roman Polansky, Michael Jackson, and O J Simpson, all innocent it seems. 'C'mon,' he says, 'would any father leave his children sleeping upstairs?'

Then, to me: ‘Tell me, fisherman. How old are you? And are you married?’
‘I’m 36 and, yes, I am married.’
‘A thousand curses on you.’
‘I shouldn’t be married?’
‘I’m looking for someone for my daughter. She’s lovely, but she has lousy taste in men.’
We have finished our third beers, and everyone’s getting hungry. Sam, who’s popped down from the Fringe, suggests the Indian restaurant a little way along .
‘Where is it?’ asks Bob.
My heart sinks. I’m not sure I can do another one of the ‘just tell me where it is’ walks.
‘Not far,’ I reply. ‘You don’t mind walking?’
‘Of course I don’t mind walking.’

It’s probably fair to say that Bob, these days, is covered in dust. But much of it is gold dust, some of it just the detritus of many hard years in public life. And then there is fair bit of naan bread and poppadom, and it rests on his belly at the corner window table of the Indian restaurant on . Bob has ordered all but one of the seven accompaniments, and we each have ordered a curry. A concerned waiter comes over to ask whether we’d like a bigger table.
Whitney has chaired a session with Bettina Arndt, a prominent Australian sex therapist. The conversation turns to the topic of the panel. Apparently, Arndt argues that even when you (and she is addressing women, I believe) aren’t in the mood, you should still ‘put the canoe in and start paddling,’ go with it for a bit, and see what happens.
Bob says, ‘Let me tell you, when you are 67 you are never in the mood, but you are always grateful.’
Sarah throws me a look. Not quite distressed. Something like horrified amusement.
‘I’ll tell you a mistake people make,’ Bob goes on. ‘Looking at each other. Imagine this: you’re at a campfire, both looking at the fire. Suddenly you can say things to each other that you couldn’t say if you were looking at each others’ faces. It’s the same with fucking. You look into each others’ eyes and you start lying, start pretending. Acting. Demonstrating your passion. Always go rear-entry. It’s much more honest.’


We leave via the front-entry, back down along .
‘Where’s my hotel?’ asks Bob.
‘Just up here.’
‘Don’t say “just up here”.’
‘At these lights.’
‘Alright.’
‘Bob, can I get a picture of us?’
‘Yes, go on.’
I hand my camera to Stuart, who’d joined us at Indian during the final moments of the canoeing conversation. Stuart skips ahead and catches us walking past the bus stop a little up from the Sly Fox.
And then Bob crosses the road. In his black jacket, his black jeans, and with his black overnight bag, he soon blends into the shadowy distance of . 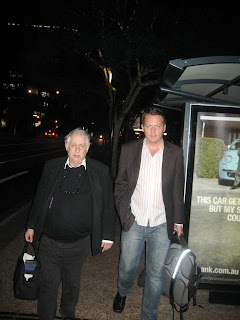