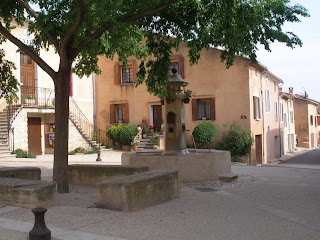 The 24th June is a special day in the small village of Flassan, which nestles on the flank of Mt Ventoux in the Department of Vaucluse in the south of France. Every year, the villagers gather at a chapel, located about 600 metres higher up the mountain and some kilometres from Flassan, to celebrate Saint Jean, the village patron. According to tradition, you are supposed to walk/climb to the chapel, but many of the older folk, the frail and those who have tired of the ritual, go by car.

We set off in mid-morning. The last houses gave way to scrub as the hills on either side closed in around us. The bitumen changed to a stony path that wound gently upwards following the groove of an ancient watercourse deep into the folds of the mountain. We walked Indian file on the narrow trail, mesmerised by the scent of wildflowers, the rosemary, thyme and chevrefeuille in particular, that grew haphazardly across the rocky landscape, splashes of colour in the golden sun. Butterflies danced before our eyes while the ubiquitous cicadas drummed us up the mountain.

We followed the dry bed for more than an hour before coming to a spring, a slow trickle of pure water from the rock surface, a small miracle. So far the going had been easy. Now we started climbing the steep side of the canyon following a barely visible track through the undergrowth. Higher up we could see the first of tall pines, like sentries on a battlement surveying their realm, ready to repulse invaders. 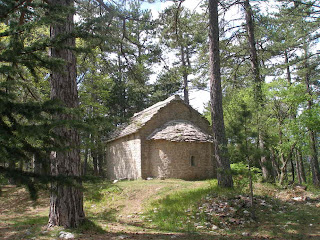 After half an hour we puffed our way to flatter ground to a forest of majestic trees, a fairyland.

A stone chapel appeared to one side; it looked ancient, almost as though it had grown as part of nature itself. Further along in a clearing stood the altar, a huge stone slab, waist-high. As we watched, two women covered it with an immaculate white cloth on which they arranged flowers, an elaborate chandelier and a pewter wine goblet.

People were gathered in groups catching up with old friends, discussing the cherry market, the competition from Italy, the weather, the latest births, deaths, weddings, divorces, scandals and a thousand other things.

Today was extra special as the Archbishop from Avignon would lead the Mass instead of the village curé. He arrived late, which was an Archbishop’s prerogative; besides, it took time to climb the mountain miles from anywhere. A refreshing pastis was called for, duly disposed of, and the ceremony began.

The highlight of the religious part of the show was the grand finale when some of the locals emerged from the chapel carrying an effigy of St Jean on their broad peasant shoulders. St Jean sat stoically throughout, his rough-hewn features indifferent to the ways of mortals. He allowed himself to be toted to various parts of the forest and then to the edge of the canyon where the Archbishop gave blessings and thanks, an archetypal figure on the mountainside. The audience listened piously as they soaked up the scrubby ridges and ravines that plunged down to the village and the mosaic patterns of the “gardens of Provence” stretching to the horizon. Away to the right, the moonscape summit filled the sky. When finally St Jean retreated to his refuge the party got under way.

The summit of Mt Ventoux as seen from the chapel

While the women set up tables and chairs, the men gathered around a well a few metres from the chapel. They had removed the cover and were now drawing the first bucket of blessed water to the surface. “Venez prendre l’aperitif,” they called, and eager hands pressed forth glasses already well-endowed with cloudy liquid pastis, home-made, bien sur. Everyone enjoyed this part of the ritual where all and sundry (no young children) were invited to share the imbibing of such a heavenly spirit.

A game of volleyball had started in the clearing, the net strung between two giants of the forest. Others played petanque, the silver balls slicing through the air to thump into the damp earth. People claimed favourite spots faithfully returned to every year, near the exact same tree. I wondered if these places were handed down from generation to generation, a sacred inheritance that guaranteed one’s place in the sun. The tables groaned under the weight of countless goodies, the smell of food hung like perfume in the air, bottles popped, knives and forks chinked as they attacked the feast.

Our little group joined a couple who had forgotten how many times they had made the pilgrimage. Jean-Pierre went off by himself at one stage and came back brandishing a bottle of wine like a trophy. “Hé voila,” he cried, “la bouteille de l’année derniere.” Apparently every year when he came for St Jean he would bury a bottle of wine in a place known only to him. He uncorked the said bottle and poured us all a measure. With chins and santés we clinked our glasses and savoured the contents. It was a good wine, even that was apparent to my uncouth palate.

The day passed in a murmur of voices, a guitar in the background, the plunk of metal balls, the sudden outbreak of laughter, and good company shared in the freshness of the mountain.

Richard Carroll is an Honours student in Creative Writing at QUT.