Letter from Vienna, by Vivienne Muller

The Habsburgs, I am told in the guide book on my last day in Vienna, were obsessed with death. I think of this as we enter the Innere Stadt and walk towards the magnificent Stephansdom, the neo-Gothic church modelled on the St Vitus Cathedral in Prague. The previous day I had spotted its spires and belltower from the Belvedere palaces, and death, then, as now, was already in the picture. Upper and Lower Belvedere, two baroque palaces separated by gardens and walkways, were built for Prince Eugene of Savoy, a great patron of the Arts. The upper palace, later transformed by that most energetic of Habsburg royals, Maria Theresa into an art gallery housing the extensive Habsburg collection and opened to the public in the late eighteenth century, was at one time the residence of the ill fated Archduke Franz Ferdinand, whose assassination in Sarajevo in 1914 was reputed to have triggered WW 1. I remember my history book at school with a very dramatic pictorial reconstruction of that momentous event, and remain puzzled even now as to how that one small death could eventually lead to so many.

When we reach Stephansdom, coming into the heart of the square on which the cathedral both squats and towers, I am struck by the way it wears its black mouldy exterior like a second skin. Inside the interior reminds me, as cathedral interiors often do, of the way life and death lie in ornate proximity in the carved and painted narratives of Christian faith and fear that decorate its naves and pulpits, its side chapels and altars. An elaborately carved stone pulpit in the centre of the church with its exquisite filigree work also features a line of toads creeping up the curved banisters held at bay at the top by a barking dog. There is some comfort in this eerie symbolism. But it is the dank catacombs beneath the church that in my present mood attract me more, for what lies beneath the church are the remains of the dead – a sprinkling of priests and cardinals, the caskets of a couple of the Habsburg rulers (the rest of the clan are in the Kaisergruft which is our next stop) and the bones of the many thousand who died of bubonic plague and were thrown hastily into pits beneath the church to prevent contamination of the living. Our young guide, admirably proficient in languages, and eager to alert us to the seductive grisliness of death, tells us that the Cathedral was closed for several years because the smell of the decaying bodies penetrated the interior. They spread them with quicklime and waited. I think of the creeping toads and the spreading black stain on the outside of the church as I head for the exit. 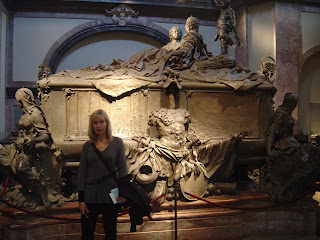 Confronting death: the author and the shadows

The Kaisergruft (Imperial vault), situated under the Capuchin Church of St Mary of the Angels and part of the massive Hofsburg Palace complex in Vienna, was especially built as a final resting place for that large and fascinating royal dynasty - the Habsburgs. I am particularly keen to see the sarcophagus of Maria Theresa, the clever and much admired woman who was Queen of Hungary and Archduchess of Austria, continuing the Hapsburg line into its hyphenated state with her marriage to the Duke of Lorraine. She lies in her tomb with her devoted husband, Francis, surrounded by the varied sized coffins of her large family of 16 - plus governess. The Kaisergruft is one of the most popular attractions in Vienna, an ‘uncanny’ sight/site, so in terms of obsession with death, the Habsburgs and I are not alone! We are greeted at the entrance booth by one of the Capuchin friars, caretakers of the crypt, who takes our money and leads us into a lift which descends into vault below. Rows of elaborately decorated coffins line the path to the main attraction - the large alcove dominated by the massive sarcophagus of Maria Theresa. Nothing quite prepares for this experience – I am in awe of its majesty but moved at the same time by the way in which the layout of the coffins around the couple’s tomb approximates a happy family gathering. And it does not stop there. On top of the tomb are life-size sculptures of Maria and her husband sitting up and exchanging some fiery banter with each other, looking for all the world like a quarrelling couple - barking dogs keeping the toads at bay. The intimacy inspires me. I consult the guidebook. It tells me Maria Theresa married for love. As we leave the Kaisergruft, I suddenly remember that among the wonderful paintings in the collection at Upper Belvedere, the piece everyone mostly comes to see is Gustav Klimt’s The Kiss.