On the barge to Macleay Island I read the Saturday sports supplement, not knowing that Adam Gilchrist’s memoir, True Colours, was sitting on the backseat.

You cannot get sea sick on the Bay Island car ferry. It is slow and steady, making steadfast progress from Redlands Bay, servicing the four islands which make up the Bay Island group. Macleay, Russell, Karra-Garra, Lamb. It sounds a lot like a 1980s Canterbury Bulldogs backline, but in real life is a little rougher. There’s a tradition of car burning on Macleay, while some liken the main street on Russell to that of an old Western, with locals drawing their curtains whenever a stranger crawls into town.

I found none of this, however. We arrived at the dock, drove off the ferry and made our way to the other end of the island. The main drag takes you right down the middle of the island, so much so that you can hardly see the water, and feel at times like you’re driving through some part of rural Queensland. It is a ten minute drive from one end to the other; the whole trip is framed by trees, beach houses which look onto the bitumen, and For Sale signs.

We reached the house at the northern end where we would stay for the weekend. It is just around the corner from Pat’s Park, which hosts a netted swimming area, and a jetty. The house itself is an old Queenslander, moved there from one of the old house farms up near Burpengary, back on the mainland. It was brought over in two pieces, on two barges, in the middle of the night. The house is a little dusty, as no one lives here during the week, and the verandah opens up at the back and overlooks mangroves, a tiny bay, a wooded point, and then all the way across the bay, back to Cleveland, Mt Cotton, and the mainland.

I set myself up on the back deck with Adam Gilchrist, rested my feet on the table. At one point during the day, morning turned into afternoon. At another, I ate. And then at one other stage, two lorikeets flew past on their way to a wattle tree. I stayed like this, looking back towards Brisbane, for the weekend. 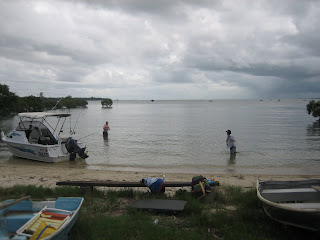 The Brisbane elite: the author and Stuart Glover exchange passes
The author:
Sam Martin is a colleague of mine at QUT.