Letter from the Jungfrau, by Sharyn Pearce

The highlight of our visit to Switzerland was always going to be a trip to the Jungfrau (the Maiden, for those of us who don’t speak German), the highest mountain in Europe where you can buy special postcards stamped “The Top of the World” and gaze in awe – weather permitting – at the marvellous mountains, still snowclad in midsummer, despite the encroachments of global warming. When we emerged at the top, courtesy of a system of trains and funiculars, all running like the proverbial clockwork, we were confronted with the spectacle of hundreds and hundreds of Indian tourists led by guides waving red flags. Most of the women were in colourful saris and many sported bare midriffs, despite the intense cold. All these people were on their way to the Bollywood Curry House, which must surely provide the highest altitude somosas in the world. A glance at the Lonely Planet guide explained the phenomenon: apparently Bollywood musicals require spectacular scenery, and now that Kashmir is no longer available, the canny Swiss have stepped in. Currently more Bollywood films are being made in Switzerland than anywhere else in the world, and packaged tours take Indian movie-fans in the steps of their idols. Insulated from the Swiss culture and food (which is pretty ordinary by the way – I can see why Indian food appeals), these tourists have their pictures taken in spots where celluloid heroes spectacularly sang their love for each other, and then they return home with these visible records of their journey. 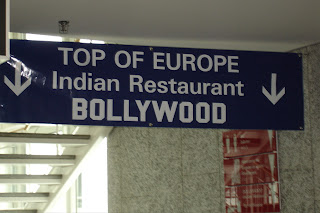 The following day we went to the Schilthorn, another mighty mountain in such an extraordinary part of the world. This time the attraction was not Bollywood but Bond, James Bond. The revolving restaurant at the top of the Schilthorn was used for the final climactic scene in one of the early Bond movies, On Her Majesty’s Secret Service, which starred George Lazenby, the only Australian actor to take on the famous role. The fact that the movie was a dud hasn’t deterred Bond fans from journeying there, eating a meal and getting a t-shirt as proof of their journey. Once more the view is the secondary attraction only – although this time it’s the Bond brand which dominates the tourist traffic.

I mused to myself that Switzerland was now a place where the celebrated scenery was clearly marginalised by the filmic associations, but one final visit reassured me that at least one Swiss icon remains a tourist magnet in its own right. On our journey out of the country we went through the St Bernard Pass and stopped to see the kennels where the legendary St Bernard dogs live with their owners, the monks who for generations have helped travellers lost in the snow. Or rather they did – the monks have now mostly gone, and the giant dogs are there only for the summer months. A major tourist attraction, these dogs may be approached, patted and photographed. For generations the top dog has been named Barry, and the most famous Barry of them all, Barry the 3rd, who was responsible for over 40 rescues, has been stuffed and mounted. In this place Barry rules, okay, and at last Switzerland seemed real to me. 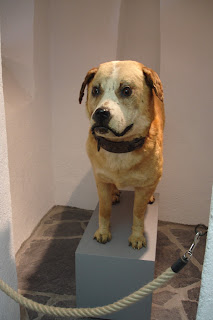 The highly-regarded Barry the 3rd

The author:
Sharyn Pearce lectures in Literary Studies at QUT.