Norman Lewis, like many travel writers before and since, was a novelist who also dabbled (seriously) in travel, but he will probably continue to be read because of his travel writing. Sometimes they are better, the things you do when you're not doing the thing you do.
Lewis wanted most to visit faraway places and to have experiences that were soon to be impossible, and it was this desire for the disappearing that took him to India and into his encounters with the remaining tribal communities of Orissa.
Lewis, who died in 2003, has many great qualities as writer. One is that he is able to adapt the information of his guides to suit his own prose. Many passages become blends of his own rather analytical, densely descriptive voice and the informative, experiential voices of his guides - the story about persuading cobras to stop biting is an example (p. 254: apparently, cobras love popcorn and will be appeased in this way). And Lewis also expertly acknowledges his debt to earlier travellers; look at the extended apology for Sebastian Manrique, a seventeenth-century Portuguese missionary, at the start of ch. 13. It's expert because the acknowledgment gives the book thematic depth at the same time as it places Lewis' experiences in the broader context of European travel to India.
Perhaps what remains most important, though, is the core reason for his travels, which is to find something very different from himself. And because that something is threatened, the process of understanding differences becomes an urgent one. The reader needs Lewis to work it out. 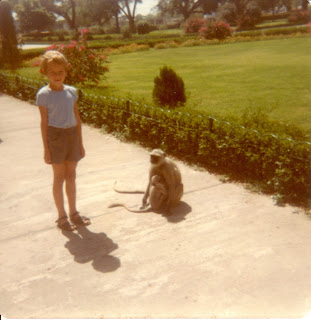 1979: One of my own less adventurous experiences in India
The book:
Lewis, Norman. A Goddess in the Stone. Picador, 1991.
See also, Evans, Julian. Semi-Invisible Man: The Life of Norman Lewis. Cape, 2008.